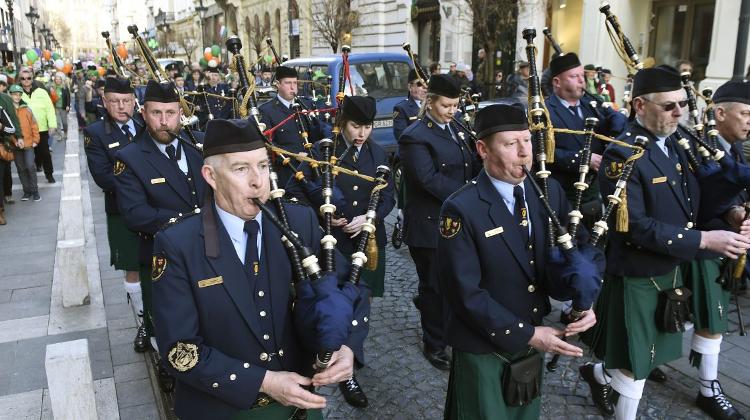 On Friday, several buildings in Budapest were lit up in green in celebration of Saint Patrick’s Day. On Sunday, the Irish national holiday was celebrated by a parade around the city. The Hungarian capital has joined the campaign of the Irish Tourist Board to celebrate Saint Patrick’s Day worldwide.

More than 240 landmarks around the world were illuminated in green on the Irish national holiday, including the Chain Bridge, Müpa, Tüskecsarnok, and the building of Bank Center in Budapest.

On Sunday, the seventh annual Saint Patrick’s Day parade was held in Budapest. The festival started on Szabadság Square, where jugglers, musicians, acrobats on stilts, and Irish dogs awaited the crowd dressed in green.

A new feature of the parade this year was the 52-member Irish Prison Service Pipe Band.

The parade took place on Andrássy Avenue and downtown Budapest, arriving at the Fogasház-Instant Club where various musical and dance acts, as well as family programmes and Irish food welcomed the celebrating crowd.