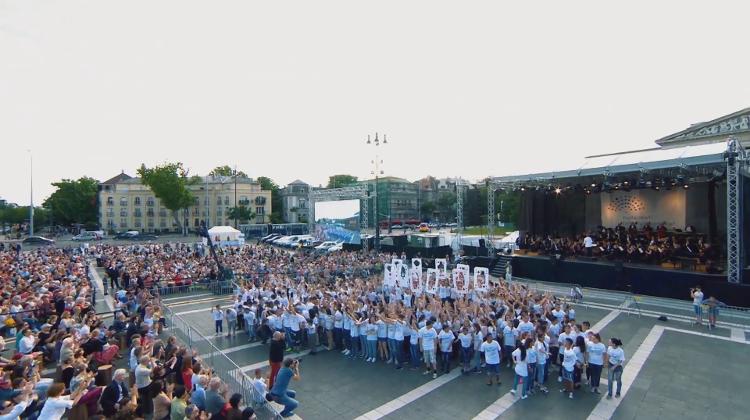 With over a thousand dancing feet, nearly a hundred musicians and one conductor, the Budapest Festival Orchestra (BFO) will once again be giving a free concert on Heroes’ Square on 10 June. The heroes of the event will be the young people, Roma and non-Roma from privileged and less-privileged backgrounds, for whom the preparations have just started all over the country.

Once again, the Dancing on the Square project will see Iván Fischer and the BFO gather more than 500 young people for a show of tolerance. When it comes to music and dance, no-one is disadvantaged – that's what this project is all about. It’s a cause championed by the likes of János Lackfi and Sándor Zwack.

Rehearsals are under way for almost 600 young people

This week, nearly 600 children from 27 schools across 8 counties (Borsod, Hajdú-Bihar, Szabolcs-Szatmár-Bereg, Nógrád, Jász-Nagykun-Szolnok, Baranya, Csongrád and Pest) began rehearsing for the Dancing on the Square project. The choreography has been provided by Harangozó Prize-winner Bertalan Vári, and the concert will be performed on 10 June in Heroes’ Square by the Budapest Festival Orchestra. The music that will accompany the dancing is being kept secret, for now.

There are many disadvantaged children who, despite never having had a warm meal, a bedtime story or a birthday cake, wouldn’t dream of missing a dance rehearsal and will take part in the focused preparations and joint creative work for the Dancing on the Square project for the third time since its launch in 2015. Without these tenacious and dedicated youngsters, the project could never have grown so extensive.

Alongside the rehearsals, which will go on for several months, the BFO has enlisted the help of the Foundation for Democratic Youth (FDY) to organise regional meetings and development camps incorporating drama, music, dance and board games to help the children develop trust in one another and learn to cooperate. The FDY provides assistance not only to the children; they also organise courses for the dance instructors who are teaching the choreography, and for the teachers and other adults who help the children, training them to become ‘local champions’.

The BFO and the FDY work closely together to enable participating communities to give greater attention to underprivileged children, advance their development and create local schemes and opportunities that promote a sense of accomplishment.

This year, the core values of the project (acceptance; dialogue; joint creation; mutual responsibility and respect; human dignity and tolerance) are being championed by six ambassadors. These are: Kriszta Bódis, head of the Van Helyed (You have a Place) Foundation; László Bogdán, the mayor of Cserdi; János Lackfi, the József Attila and Prima Primissima Prize-winning author and poet; Nóra L. Ritók, the head of the Igazgyöngy Alapítvány (Real Pearl Foundation); Sándor Zwack, chairman of Zwack Unicum Nyrt.; and cellist Antónia Bodó, who’ll be representing the orchestra.

On 10 June, hundreds of children will get to show what can be achieved when you work together, to the accompaniment of live music by one of the world’s top symphonic orchestras. Young heroes in Heroes’ Square – in the spirit of mutual acceptance.

The 2016-17 Dancing On The Square project is made possible with the support of EEA Grants, in aid of promoting inter-cultural dialogue between Roma and non-Roma.

“The reason I find the concept and mechanism of the Dancing on the Square project so appealing is that it creates a great experience and helps improve the self-image of kids who would otherwise have no such opportunity. Eventually it draws them into a complex musical experience, demonstrating there’s a sweetness to the ecstasy of classical music and it’s great to be surrounded by it, to move to it. I hope this beneficial virus is able to reach and infect as many people as possible.” János Lackfi, József Attila and Prima Primissima Prize-winning author and poet

“Our shared goal is to break the vicious cycle of poverty, to build bridges in this factious society and create points of contact. But most importantly, children’s success is society’s success.” Kriszta Bódis, CEO of the Van Helyed (You have a Place) Foundation

“In previous concerts it was incredibly uplifting to witness their efforts, to see their eyes sparkling with enthusiasm, and in the end to watch their faces shining with happiness at the success of their production. It’s an experience that will stay with them for the rest of their lives, something that can give them faith in themselves and change their destinies.” Antónia Bodó, cellist, the BFO

“As a father of two boys, I know the responsibilities a parent has to raise kids to be accepting of others, but what they see around them also has an influence. The Dancing on the Square project helps with that.” Sándor Zwack, chairman of the Board of Directors of Zwack Unicum Nyrt.

“The orchestra has a lot of Roma musicians, and they play for empowerment and against repression!” László Bogdán, mayor of Cserdi

“The Dancing on the Square project is an extraordinary initiative. It’s important for many reasons, but perhaps primarily because of its power to build communities. It can create shared experiences for the participating youngsters, both during the preparation and at the marvellous recital itself, which in turn can give a tremendous boost to their social skills and inter-personal abilities. The sense of being chosen improves their self-esteem, and the project can have a positive impact on their whole personality by improving their social and cooperative abilities and promoting group identity.” Nóra L. Ritók, head of the Igazgyöngy Alapítvány (Real Pearl Foundation)