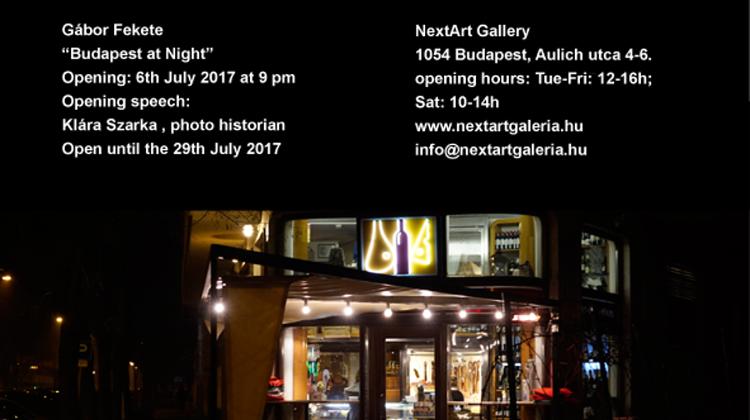 Now On Until 29 July. ‘Budapest at Night’ by Gábor Fekete is a photo series depicting the unique relationship of the Swiss-Hungarian artist and his hometown, through a set of calm, nostalgic and sometimes humor-filled night shots. The series, capturing over two years of work, has been disclosed in a form of a book with the title ‘Budapest, when the night falls’, published by Corvina Publishing House, in which Fekete’s images have been supplemented with the writings of the recently deceased, acclaimed writer and critic, Mihály Dés.

As the vast majority of the exhibited photographs at NextArt Gallery were not featured in the book, the exhibition serves as an addition in a way to the publication, where those interested can personally see and physically observe the photographs, each one on their own.

There is an instantly noticeable playfulness in the creative style of the artist, now living and working in Luzern; nearly three thousand photographs hold the evidence of a contemporary detective adventure. Fekete, through placing himself in the role of a tracker, explored his long left city in the darkness of the night with his camera ensuring to record the moments he found most significant.

The blurred portraits of the nocturnal performers; the light polluted, “man-free” cityscapes; and the urban archetypes captured in their sound solitude, all form part in the metropolitan jungle. He illustrates Budapest’s portait after sunset, sometimes through soft, colourful tones, while other times with harsh, monocrome contrasts.

Eventhough the photographs cite back Brassai’s 20th century urban documentarism, or Weegee’s spontaneously captured “crime scenes” in New York, perhaps a romantic scene from a French nouvelle vague movie, they still gain real context in their own era, in the present.

As the pictures simultaneously overwhelm with personal memories, they put a cheeky smile on the face of any person familiar with Budapest. After all, who doesn’t know the narcotic smell of the city in night rain, or who hasn’t wondered at the neon lit interiors of the empty cafés.

”Budapest at Night” can be both placid and teeming, occassionally showing its ‘turn of the century’ cultural side, and at other times offerring its dull simplicity, abundant with post-socialist features, to the venturers of the night. To the eternal venturers, like Gábor Fekete.