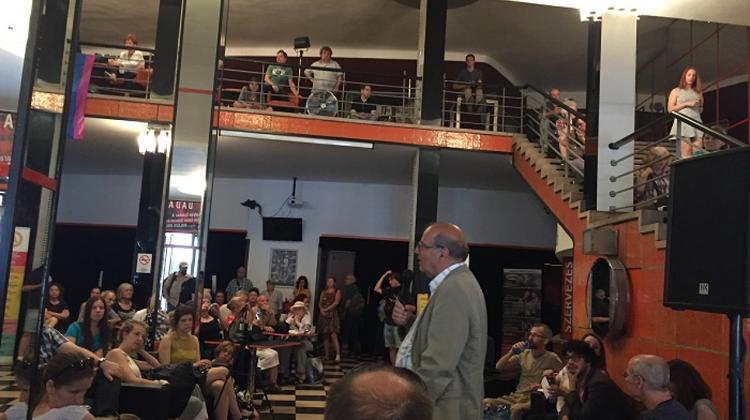 In a crowded hall in Buda Tuesday night, a man stood reading out loud an excerpt from Martin Luther King Jr.’s Letter from Birmingham Jail. But this was not a Fourth of July celebration.

The audience had gathered for a hastily-convened public conference on civil disobedience, following the decision of several Hungarian non-governmental organizations not to register themselves as “foreign-funded NGOs”, as required under Hungary’s controversial new law.

“There is no room in a democracy” for the new law, co-chair of the Hungarian Helsinki Committee Márta Pardavi told the standing-room-only crowd. Explaining the organization’s decision not to comply, she added that “we couldn’t have decided otherwise.”

Besides the Hungarian Helsinki Committee, the Hungarian Civil Liberties Union (TASZ), Amnesty International Hungary, and K-Monitor are among the organizations opting not to comply with the new rules.

“We need to raise the public’s awareness,” said activist Bálint Misetics. Civil disobedience is a “last resort” protection for the constitution, allowing individuals to call the majority’s attention to disparities between a country’s values and how it acts, he said.

Other speakers highlighted that civil disobedience is a form of free speech.

“The dynamics [in Hungary] resemble an autocracy more than a liberal democracy,” said Zoltán Miklósi, a researcher at the Eötvös Károly Institute — the event’s sponsor — and a member of the Central European University’s faculty. Miklósi emphasized that the goal of civil disobedience is to use action to convince others. For him, even holding a conference on civil disobedience is a show of “moral strength.”

Bernadette Somody, the Eötvös Károly Institute’s director, presented a legal case for why she believes there are grounds for civil disobedience in Hungarian law, emphasizing that the moral considerations behind an individual’s actions and decision to violate a specific law must be taken into account.

Dániel Máté Szabó of the Hungarian Civil Liberties Union gave examples of past cases where the organization provided legal counsel to Hungarians —from teachers to protesters— wishing to violate the law for personal moral reasons.

Some observers believe that there is precedent for successful civil disobedience in Hungarian history. The event’s moderator, legal scholar László Majtényi, argued that in the nineteenth century Ferenc Deák ’s “passive resistance” and the ultimate emergence of the dual monarchy are an example of civil disobedience with concrete results.

Civil disobedience has been used extensively over the past months in Budapest’s city park, where environmental activists are opposing construction plans.

While noting that Justice Minister László Trócsányi had declined an invitation to speak on the panel, Majtényi noted that in the past Prime Minister Viktor Orbán did acknowledge and even support civil disobedience actions, including a taxi blockade.

On June 14 Trócsányi told Hungarian state television that civil disobedience as a legal category is not recognized by Hungarian law.
Orbán later made his own view clear to Kossuth Rádió: “There is no such thing in Hungarian law.”