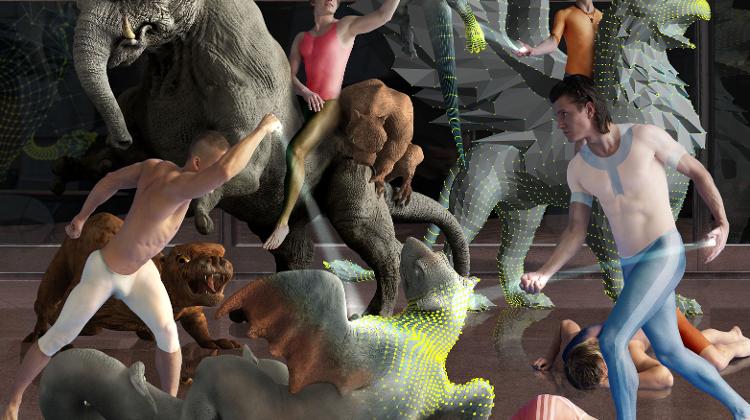 The exhibition New mythology presents three creative periods of Russian artist Olga Tobreluts from between 1995 and 2017.

Tobreluts’s art took a radical turn in the early 1990s, when she shifted from painting to computer graphics, complemented by photography and 3D modelling. Through her efforts to portray the human body by means of 3D modelling, she is associated with Russian Neo-Academism.

Founded in 1989, the New Academy is an important movement in contemporary Russian art. Tobreluts has been a member of the Academy since 1994 and as head of the New Technologies Department, she became a driving force of the trend. Bruce Sterling called Olga Tobreluts “Helen of Troy equipped with a video camera and a computer.”

Many of her works would become emblematic of the movement. Taking mythology and history as a starting point, Olga Tobreluts builds a new reality that transcends the historical context and connects to the present. Whether or not using elements of traditional mythology, her ornamental myths speak of the present.

Tobreluts’s stories are in fact effective artistic tricks, enabling the modern viewer to readily understand them. By means of diverse forms, she reinterprets the important mythological figures of the history of Western culture, and in these unique myth-structures the viewers can discover their everyday environment.

Created in the early 1990s, her series Models brings to life antique sculptures, gave them true-to-life bodies and dressed them in clothes by fashion brands. The series won first prize in the German Griffelkunst for Best European Computer Graphics. In 1999, Tobreluts presented her new series Sacred Figures at the Tate Gallery’s show Heaven in London. The series featured ancient portraits receiving new faces.

In her media works, she is a step ahead of the technical development of art, pioneering techniques that the media artists of the next generations are likely to employ. Her work has drawn considerable international attention, and she has won numerous awards. Her works have made it to the cover of journals including ART, ATTITUDE and the Observer Magazine. In 2000, Olga started working on an ambitious project comprising a series of 54 works titled Emperor and Galilean, the eponymous characters of Henrik Ibsen’s play.

The series was exhibited at the Henie Onstad Museum in Olso, and later at the State Russian Museum in St Petersburg. The poster of the 2015 retrospective exhibition of St Petersburg Neo-Academism at the Ludwig Museum in Budapest features her work.

In 2003 Olga Tobreluts almost entirely gave up media art and returned to painting. She continues to develop her painterly world by means of traditional painting techniques, while carrying out experiments with the chemical makeup of paints to expand her range of methods of light transmission. The Russian Academy of Art elected her honorary academician for a series of paintings of hers in 2016.