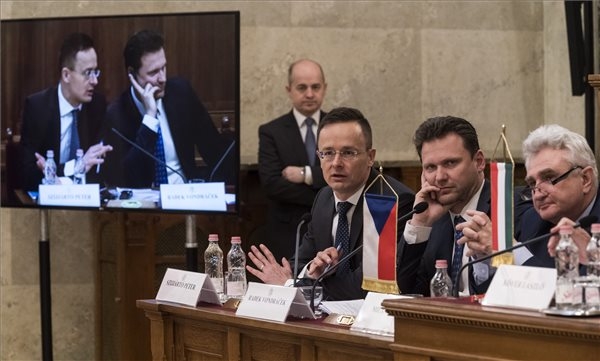 “But the Hungarian government has put on its gloves and is fighting this fight, and it will not allow any illegal migrants to enter Hungary,” Szijjártó said.

The commissioner said on Tuesday that he would “stand by every single word”, and he rejected the Hungarian foreign minister’s demand that he resign.

He cited Orbán as telling a group of city officials in Veszprém on Feb. 8 that “we do not want our colour... to be mixed in with others” which he branded as “clear-cut statement of racism”.

“So yes, I did call the increasingly authoritarian – though democratically elected – Viktor Orbán a racist and xenophobe,” the UN High Commissioner said, adding: “It is time to stand up to the bullies of Mr. Orbán’s ilk.

Hatred is a combustible force; and it will not win – not in Europe; and not today.”

Szijjártó said Hungary’s sovereignty demands that the country should have the sole right to decide who enters the country.

“No one can tell us that we should be diverse; and, sorry, but we won’t stand for anyone branding us racist for this reason,” he added.

He said Zeid was unfit for his office because “an international official with a high salary provided by member states” cannot act or behave in this way; neither can he speak in this way or start a fight with a democratically elected prime minister.

Szijjártó said he maintained his position that the human rights chief should resign.

The minister insisted that the high commissioner was an extreme pro-migrant official who wanted to recognise migration as a fundamental human right and he wanted to bring migrants to Europe.

Orbán and the Hungarian government have made it clear that migration is a source of danger which must be stopped, he said.

“The kind of dangers and disorders that parallel societies cause are clear to see,” Szijjártó said.

“The dispute is over whether a diverse and multicultural society is in itself a value and superior to a homogenous society. The Hungarian government says no, it is not.”

“We Hungarians who have been here in the Carpathian Basin for 1,100 years want to stay here how we are now, and nobody is going to take that decisionmaking right away from us...” he said.

He said it was “pathetic and unmanly” that after having read out his statement on Tuesday, Zeid had left the UN Human Rights Council session.

He also objected to not receiving an official reply to the letter he sent to the high commissioner, but instead the response was in the form of a press release.

Szijjártó noted that in the debate on the Global Compact for Migration in New York on Monday, he would represent the Hungarian government, and again make it clear that “we are not willing to give up an iota of Hungarian sovereignty or security”.

Asked what would happen if the high commissioner refused to resign, Szijjártó said: “We are under no illusions,” and a relatively long struggle was ahead, since the debate on the migration compact will take place in December.

When it was put to him that in September 2015, the Hungarian prime minister argued in favour of the introduction of global migration quotas at the UN General Assembly, and that the government was now communicating a contradictory line, Szijjártó said the government had already made it clear that the issue is not solely a European problem and the whole world must handle it.

He said the issue could not be resolved by means of quotas. It was not about “bringing people to where there is no problem, but resolving it at the point they leave,” he added.

Asked about government office chief János Lázár’s filmed comments about migrants that he made on a visit to Vienna, Szijjártó said he had not seen the video.

“But in Vienna, among the children enrolled in school, there is a huge proportion of immigrants, and the question is whether we want a similar situation in Budapest or in other Hungarian cities.

I do not, for my own part, want Hungarian society to change in the way this is now happening in Austria or Vienna.”