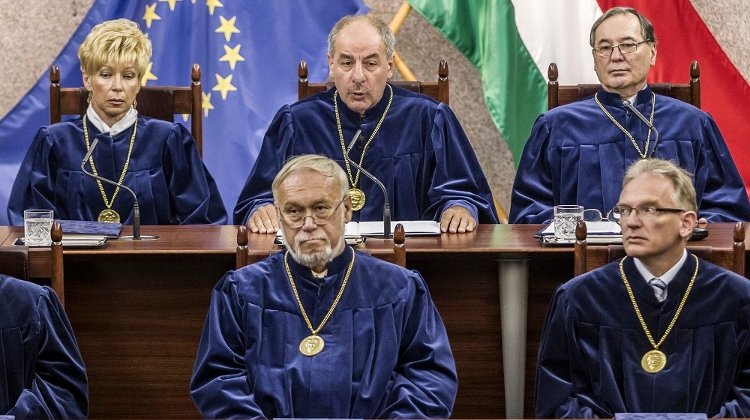 A liberal and a pro-government pundit lambast the Constitutional Court for not discussing the constitutionality of the so-called ‘lex CEU’ and the anti-NGO legislation.

On Tuesday, the Constitutional Court announced that it will postpone discussion of the two controversial pieces of legislation, passed by Parliament a year ago, until the European Court decides whether the two laws are in-line with EU law.

One set new conditions on the operations of the partly Soros-funded Central European University, while the other obliged foreign funded NGOs to mention this fact in their publications.

On Index, Gábor Miklósi wonders if the Constitutional Court even began to inspect the lex CEU and the NGO laws, or just pretended to do so, in order to save face. The liberal columnist finds it a ‘spectacular stunt’ that the same Constitutional Court which in the dispute over mandatory migrant redistribution quotas in the EU, claimed that the Hungarian Constitution should put ahead of EU law, is now willing to compromise Hungary’s legislative autonomy.

Miklósi suspects that the Constitutional Court does not have the guts to decide in the ‘politically extremely sensitive’ debate over the CEU and NGOs. Meanwhile, a new NGO bill, unofficially called “Stop Soros” is under consideration in Parliament.

Megyeri agrees with the dissenting judges that the Constitutional Court has created a precedent for the EU court to intervene in Hungarian legal affairs. Megyeri interprets all this as ‘putting Hungarians at the mercy of the unlawful EU institutions’.

In conclusion, Megyeri suspects that the Luxembourg court will rule against the lex EU and the NGO bills, but Megyeri nonetheless thinks that the two laws are ‘resilient enough to withstand the challenge of liberal globalist critics, and will prove lawful even without the Constitutional Court’s decision’.

This opinion does not necessarily represent the views of XpatLoop.com or the publisher. Your opinions are welcome too - for editorial review before possible publication online. Click here to Share Your Story