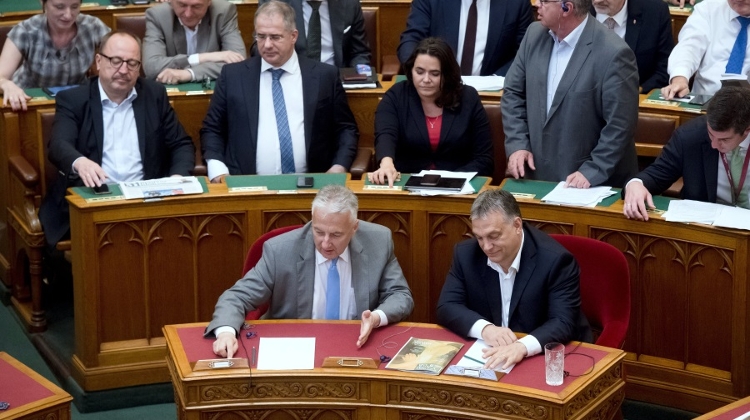 Lawmakers passed a government initiated constitutional amendment prohibiting the settlement of foreign nationals in Hungary, setting up an administrative high court, and banning people from living in public spaces.

The amendment submitted to parliament by Justice Minister László Trócsányi also declares the protection of Hungary’s constitutional identity as a duty of the state.

A clause on the authority of the European Union was also amended to declare that joint EU and national powers must be in line with the basic rights and freedoms enshrined in Hungary’s constitution.

It also stipulates that such joint powers cannot restrict Hungary’s right to make decisions on its territorial integrity or form of government. The amendment also states that foreign nationals cannot be resettled in Hungary.

Foreign nationals without the right to free movement or residency will now only be allowed to reside in Hungary if the Hungarian authorities approve their request to do so, according to the amendment.

Under the amendment, only foreign nationals facing persecution in their homeland or country of residence based on their race, nationality, social background, religion or political views will be eligible for asylum in Hungary.

A clause stating that asylum applications submitted by persons arriving from safe countries shall be rejected has also been added to the constitution. The amendment also includes protection for the home and private life, stating that “people must not be bothered in their homes”.

“The right to freedom of expression and exercising the right of assembly cannot come with a breach of others’ private or family lives or homes,” the amendment says. The constitutional amendment also includes a passage establishing a public administrative high court to deal with legal disputes in public administration.

The new Supreme Administrative Court will function as a supreme court over lower administrative courts. Once the amendment enters into force, the National Office of the Judiciary (OBH) and the National Judicial Council (OBT) will only have authority over regular courts.

The amendment requiring a twothirds majority was passed with 159 votes in favour and 5 against. It was supported by the ruling FideszChristian Democrat group, lawmakers of radical nationalist Jobbik, former Jobbik and currently independent MP Dóra Dúró, as well as Imre Ritter, representative of the German minority.

Ákos Hadházy, who recently announced his decision to quit green opposition LMP, voted against the amendment, as did the four lawmakers of the opposition Párbeszéd. MPs of the Socialist Party, LMP and the Democratic Coalition did not vote.