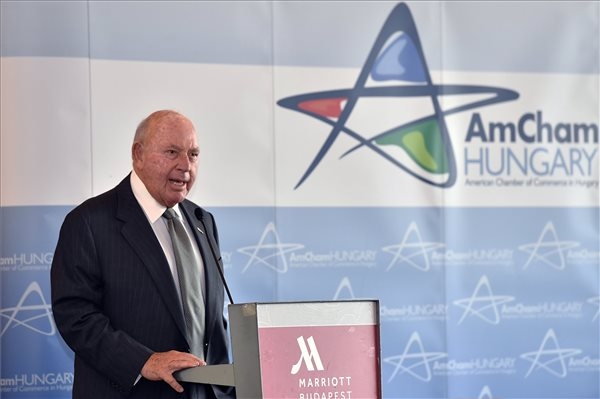 David B. Cornstein, the US ambassador to Hungary, at a business forum organised by the American Chamber of Commerce in Hungary (AmCham), described Hungary’s workforce as “exceptional” and “highly intelligent”.

He said it was “terrible” that Hungary receives 80% of its energy supply from a single other country. The ambassador said he believed the Hungarian government shares this sentiment, adding that they were working to have the US supply 40% of the country’s energy needs. Cornstein called Russia a “disruptive” nation.

On another subject, the ambassador called the situation of Budapest’s Central European University an emotional affair. He said it would be unfortunate if the CEU moved to Vienna, adding, at the same time, that he believed a solution to the problem was near.

László Szabó, Hungary’s ambassador to the US, said many aspects of the two countries’ relations have changed over the past year.

He noted that US President Donald Trump and Hungarian Prime Minister Viktor Orbán spoke on the phone for the second time shortly before Cornstein had taken up his post in Budapest this past summer and thanked the ambassador for his support.

Szabó said the two countries’ trade relations have “never been better”. Hungarian exports to the US increased by more than 6%, while imports rose by 4% in Q2 of this year, he said.

Though bilateral relations went through some difficulties during the Obama administration, the two countries were allies in many ways, Szabó said.

Over 1,000 Hungarian troops participated in NATO missions in Kosovo, Iraq and Afghanistan as well as in the fight against the Islamic State terrorist organisation. Szabó announced that Hungary will open a new incubator in Washington.

Last year, US companies made numerous significant investments in Hungary, he said, adding that US-based firms employ over 100,000 people in Hungary.

He said significant progress had been made in getting American liquefied natural gas to Hungary and voiced hope that once this goal is accomplished, Russia’s dominance of the natural gas market would come to an end.