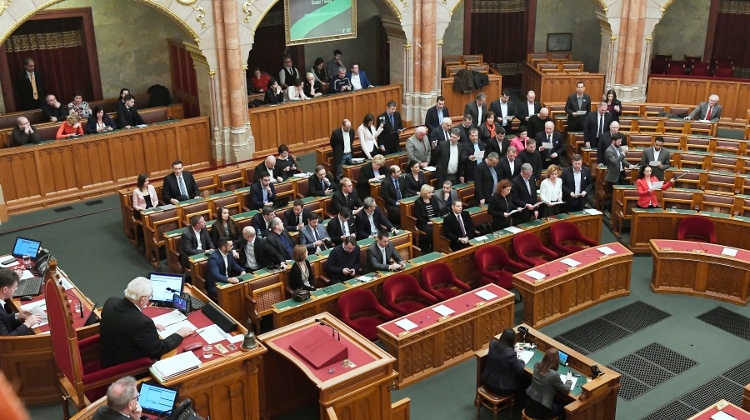 A special session of parliament lacked a quorum Thursday due to a boycott by ruling party lawmakers.

The session was initiated by opposition parties and aimed to declare a Dec. 12 parliamentary vote on changes to the labour code invalid, as well as to discuss issues around an opposition protest at public media headquarters on Dec. 16-17.

Conservative Jobbik MP Péter Jakab said that the message the ruling parties conveyed by staying away was that they were fine with letting “people work to death” while they themselves were “work-shy”.

He said that the “slave law” adopted was invalid “not only because it was adopted unlawfully but also because the Hungarian people reject it”. Concerning the protests, Jakab said “it is only in dictatorships that armed guards are sent to confront opposition lawmakers”.

Tímea Szabó of the Párbeszéd party read out a declaration together with MPs of the Democratic Coalition and the Socialist Party, in which they pledged to “promote the demands of the Hungarian people in cooperation with all democratic opposition forces”.

They demanded that the public media “provide public service rather than serve one party”. The MPs also demanded that parliament should ban “paid government propaganda” and annul the “slave law”.

László Lóránt Keresztes, co-leader of LMP, said that ruling Fidesz had “betrayed” the people by promoting the “slave law” and argued that the government “attracts multinational companies based on Hungary’s cheap labour”. Following the abortive session, the opposition deputies stood on Parliament’s steps outside and read out their declaration.

The Fidesz group reacted by saying that the opposition’s “performance” was nothing more than “theatre” and “trouble-making”.

In a statement, they wrote that the opposition “organises violent protests using [George] Soros’s money” and insisted that the opposition’s actions were aimed at helping a “pro-migration majority” to power in the European Parliament in the upcoming EP elections.