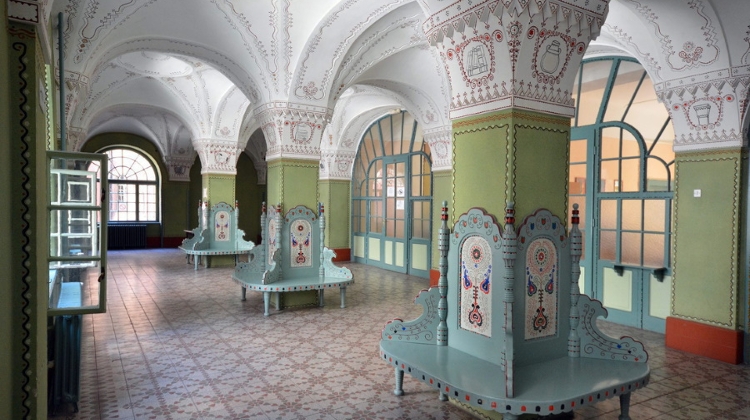 In Hungary, this style takes the name of Secession (Szecesszió), as it’s a result of a strong need of independence and a way to express the national identity of Hungarians, within the Empire dominated by the Habsburg.

From the top of Saint Stephen’s Basilica, the visitor’s curiosity is fired up by a green and yellow rooftop. When Ödön Lechner, the father of Hungarian Art Nouveau, designed the seat of the Postal Savings Bank, he did not know that the authorities would despise it so much to stop giving him public procurement and interrupt the financing of his style. Despite a difficult start, this palace, a bit hidden in narrow Moon Street (Hold utca), melted with the nature of Budapest.

The tree closest to it had to learn how to grow leaning forward, to leave space to this ensemble of local folk art. On the roof, symbols of productivity and providence, such as beehives and snakes, are paired with elements from the treasury of Attila the Hun, considered an ancestor of the Magyar tribes descended from Mongolia in the IX century.

With this work, Lechner elevated towards to the sky the uniqueness of the Hungarian craft and the language of forms of the population the savings bank was aimed to. If at the time of the Austro-Hungarian Empire this was a work that seemed to belittle Hungary as a Kingdom, nowadays it’s the main seat of the State Treasury.

Like a smoking-hot lady, this is the one facade that makes every occasional pedestrian turn and stare. Designed by Albert Kálmán Kőrössy and finished in 1904, this apartment house in Munkácsy Mihály street brings Budapest closer to Barcellona in terms of sensuality.

The two women framing the main door are a rare appearance in Hungarian Art Nouveau, which is dominated by symbols. They and the other decorations are sculpted by Géza Maróti (Gresham Palace, Liszt Academy of Music). 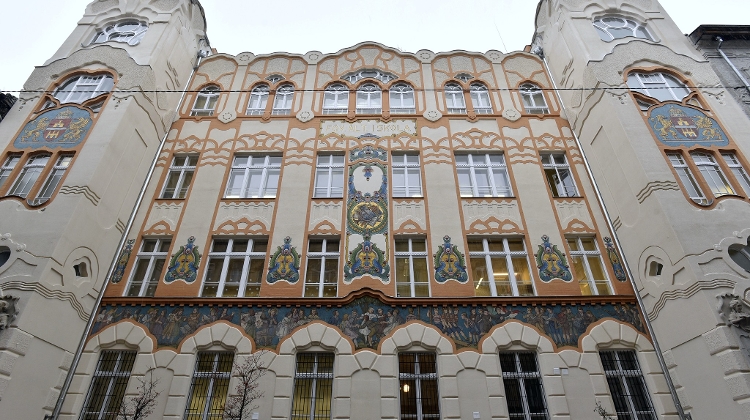 This building could not be in another place, but Hungary. Designed by Ármin Hegedűs (Gellért Baths), it’s facade has an explosion of Miksa Róth’s mosaics representing Hungarian pupils playing, studying and singing. Garnished with a pinch of national pride, this is one of the most impressive schools that you can ever see. 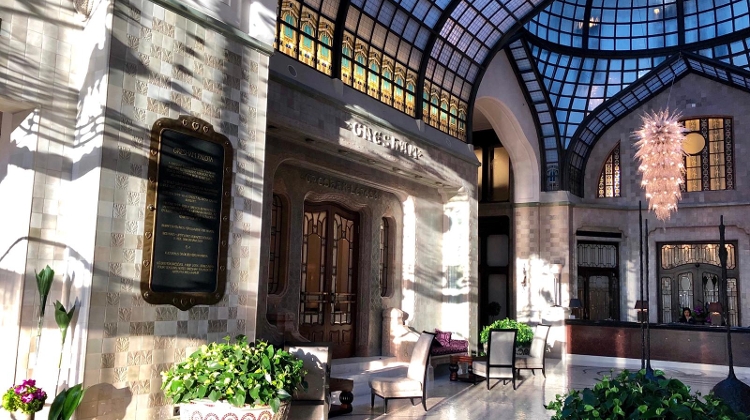 At the beginning of the XX century, it was a matter of prestige for international companies to enter into recently merged and emerging Budapest. Insurances company like British Gresham Life Assurance made huge investments to stand out with massive headquarters (see also Anker building and New York Palace), combined with apartments and cafés.

Zsigmond Quittner, together with the Vagó brothers, designed this highly visible structure, positioned right opposite to the Pest access to the Chain Bridge. The restoration in the Nineties saved the combination of curvaceous Art Nouveau lines to Art Deco elements such as the peacocks on the three iron gates (front, right and left entrances).

It also gave new life to one of the few orientalist domes in Budapest, which makes the ceramic covered interiors unparalleled and bright. Not to be missed. 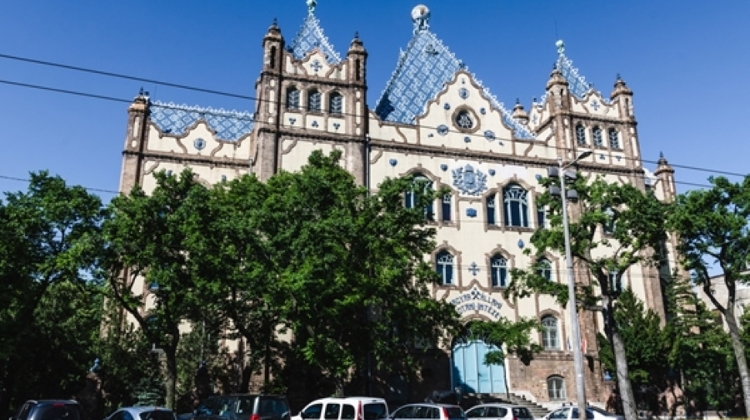 Orography and hydrography meet thanks to Ödön Lechner’s ability to build structures expressing their own function. Commissioned in 1896 to design the new seat if the Hungarian Geological Society, Lechner reproduced the Tethys Ocean with a roof of turquoise and blue Zsolnay ceramic tiles, decorated by elements of national folklore and fossils.

The cave-like and shapely interiors are also rich in motifs from Hungarian folk art.

Do you know the Grimm brothers’ fairy tale Hansel and Gretel? I think the house where the twins were imprisoned looked like this villa close to Városliget (City Park). It appears as a pink glazed cake with slender towers elevating like birthday candles.

Ödön Lechner designed it together with Marcell Komor and Dezső Jakab. I find “very Lechner” the round-shaped bench incorporated into the entrance, as well as the bright winter garden in the ground floor.

For those with a childish side, this former toy store it’s irresistible. What I like the most in these buildings are the decorations in the shape of toys. The courtyard bannisters are also shaped like rocking horses and the folk-inspired figurines at the entrance are a real treat for the eyes.

“One of the biggest toy store in Europe it’s opening on the corner of Rákóczi Street, Dohány Street and Síp Street” wrote the local magazine Pesti Napló in 1909 about the shop, the sign of which is still decorating this pretty unique stable. Built by the Vagó brothers, it’s also a tribute to Viennese architect Otto Wagner, with the knobs between the ceramic tiles well visible on the facade.

This off the beaten path house hides a wonderful Art Nouveau courtyard. A dance of flowers, columns and butterfly-shaped bannisters, it seems taken from a fairy tale book. From the outside, it has some similarity with the Postal Savings Bank and I love its turquoise doors decorated with little hearts.

The facade looks again like embroidery, but it’s decorated with plaster instead of expensive Zsolnay ceramics. A curiosity: the ground-floor hosted a casino at the beginning of the 20th century until it was acquired by a Count and his wife, who converted it into apartments.