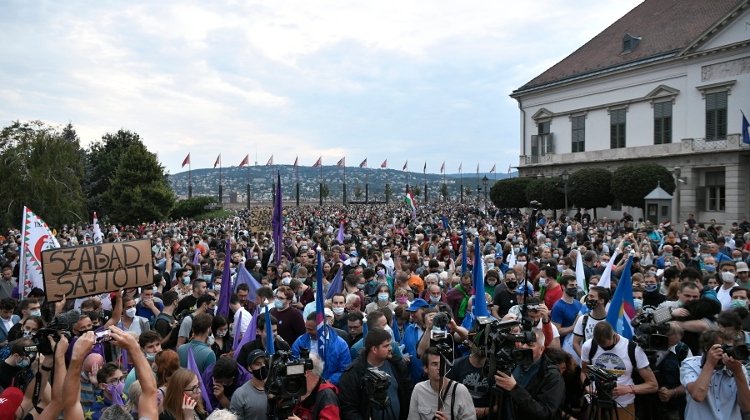 A demonstration was held in Budapest on Friday evening in protest against the dismissal of the editor-in-chief of news website index.hu, and for media freedom.

The protest started at the editorial office in north Buda, then the demonstrators marched to Buda Castle.

Last Wednesday László Bodolai, chief of the foundation that exercises the employer’s rights at Index, initiated the dismissal of Szabolcs Dull. Two days later the portal announced in a “service statement” that all editors and almost all staff members had decided to quit.

“The journalists of Index have demonstrated that it makes sense having a moral backbone in this country,” András Fekete-Győr, leader of the opposition Momentum party, told the crowd, which filled Szent György Square next to the prime minister’s and the presidential offices.

They had to stand up because “100 metres from here there is a cowardly little man who does not dare to face a mirror”, he said, adding that “we are fed up with cowardly politicians and their propagandists.”

“I would like to build a Hungary of brave people…, a country with a free press, an unbiased public media, an independent Academy of Sciences, a country with a Central European University and Index,” Fekete-Győr said.

Independent lawmaker Ákos Hadházy said that “this demonstration should not be the last, the protests should continue”. He insisted that the senior officials of the public media should be appointed on the basis of consensus.

“There is no regime against which you can’t fight successfully but the stricter the dictatorial rule, the stronger resistance one should put up against it,” he said.

The demonstration was initiated by Momentum and attended by politicians of several left-wing parties.