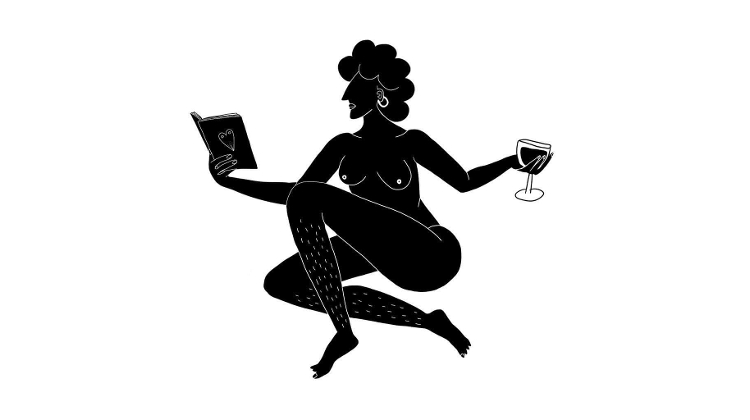 One year ago, as the world was adjusting to the spread of a new virus and unprecedented government shutdowns and isolations schemes, the Lazy Women appeared in a small corner of the Internet.

Behind it is a team of young women with roots in Hungary who want to challenge today’s productivity obsession and any negative connotations connected to laziness.

To celebrate Women’s History Month, we asked the founders Bori Toth, Zsofi Borsi and Luca Dudits to tell us about their project, of the state of women’s rights in Hungary today, and what their plans are for the future.

Who are the Lazy Women?

Lazy Women is an open platform created by young women to amplify the voices of those identifying with womanhood all over the world. It aims to open a space for conversation around today’s productivity-obsession, which affects women disproportionately given the expected ‘double’ or ‘triple shift’ from them: in today’s society, we experience that apart from being successful in your job, women are often still expected to do all the domestic and emotional labour at home, too. It is within this sense that we are on the mission to reclaim laziness.

Behind Lazy Women, there is a fantastic and diverse team of illustrators, journalists, students, activists and young professionals.

Why does the world need lazy women?

Our mission is to challenge the negative connotation of laziness and reclaim it by making “public” the many endeavours women around the world pursue, often in the “private sphere”, which are considered less valuable than monetized or public work. While platforms focusing on the experiences of women are becoming more common, we feel that there is a lot we can do to tell these stories and talk about issues that aren’t mentioned in more mainstream media.

We also believe in the power of applying a feminist lens on the issues we discuss; to always keep in the back of our minds how topical events impact those who identify as women.

It is quite ambitious to start a web platform. Are you really that lazy?

Haha, this is a fair point. No in fact – as you’ve probably guessed by now – we are not lazy at all. All of us are juggling jobs, studies and Lazy Women at the same time. Bori is working as an economic analyst in London, Zsofi is a political consultant in Budapest and Luca is the communications officer for Hungary’s largest LGBTQI+ NGO. We try to embrace laziness though and take time for ourselves when we need it to recharge.

However, the inspiration for starting the platform came from a time of procrastination, being stuck at home during the first wave of the pandemic and just wanting to do something creative to get us out of the lockdown blues.

I understand that you started this project at the beginning of last year during the pandemic lock-down. What has the experience been like?

Looking at news outlets – especially the ones tailored at women – during the first wave, we’ve encountered plenty of articles suggesting that we should “use” the pandemic to become fitter, to “better ourselves” or to become even more productive. We wanted to create a platform that counters the shame around moments of un-productivity and a space that doesn’t make you feel horrible about yourself.

Throughout the year, when restrictions were lifted in Hungary during the summer, we also had the chance to organise several incredibly successful real-life events, such as our Sustainability Workshops and Lazy Movement classes, which is something we are very excited to re-introduce once restrictions are finally lifted in both Hungary and in the UK.

The recent period has been relatively hectic with the pandemic and juggling jobs, however, we have used this time to focus on tailoring the online platform. Our content shifted a lot as well, as new contributors expressed interest, and so now we have several interesting series running, on topics like women in winemaking or film. A lot of things change all the time, and sometimes it’s hard to keep up, but we’re very much enjoying the journey.

Are you a female-only project?

No, we are an inclusive platform aimed at anyone who identifies with the female experience and with ‘womanhood’.

The founders of Lazy Women are all from Hungary and many of your contributors are Hungarian, yet your platform is in English. Why is that?

While many of us are from Hungary, most of us either live abroad or have lived abroad at some point in our lives and came to appreciate the global accessibility that the English language provides. We also value diversity – as we have grown in the past year, we’ve had a wide range of contributors from different countries, who all provide interesting perspectives and challenge the way we think. This seems essential as feminism becomes more intersectional – so being accessible to non-Hungarians was a must for us really.

On the topic of Hungary and women. What would you say are the greatest challenges for Hungarian women in 2021?

There are several issues worth mentioning here. In recent years, we have seen a cruel backlash against LGBTQI and reproductive rights. Studies suggest that governments that target human rights usually lead to a negative shift in public opinion as well, which is concerning. We think we need to push back against these conservative antics, but it is rather difficult during the pandemic.

We had to retort to social media activism instead of taking the streets or mobilizing. And while it is great that online events can be accessed from anywhere with an internet connection, that internet connection is not something given or guaranteed. The feminization of poverty is increasing as well due to the pandemic, which is very worrying.

Another issue is the surge in violence against women and domestic violence that we’ve seen in Hungary the past couple of years. Institutions rarely recognise women’s narratives of violence and abuse, and there is no support provided by the state to lessen or mitigate this issue. A few NGOs are doing incredible work on this front, but have very limited resources.

We think, for now, we want to grow our team and audience, cover more interesting topics and establish ourselves as a credible feminist media.

Interview by Amanda Sonesson, originally published on Lossi 36, an official partner of Kafkadesk.