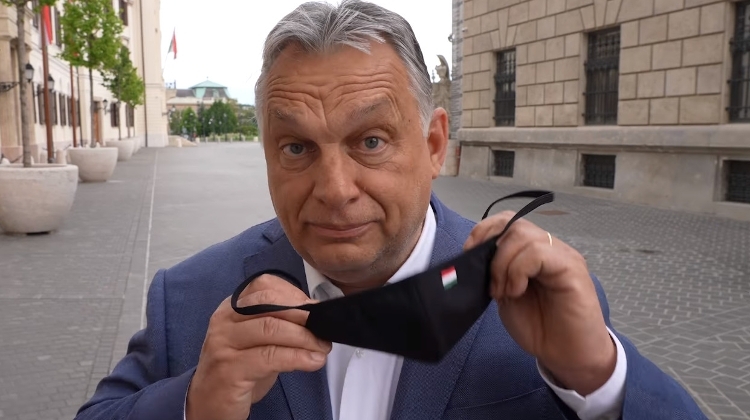 Hungary passed 5 million vaccinations over the weekend, allowing it to lift most of its coronavirus restrictions, including the night-time curfew as well as the rules on outdoor mask-wearing and social distancing.

“We can say goodbye to our masks,” Prime Minister Viktor Orbán said on Facebook on Saturday, adding that it had been clear for the past few months that “if we want our normal, healthy, happy lives back, it is with the vaccines that we can successfully protect ourselves against the virus.”

“We have achieved that goal now!” Orbán said, thanking everyone who contributed to the effort and decided to take the vaccine and asking those who have not yet been vaccinated to get inoculated.

The government has issued a decree on the next stage of Hungary’s reopening, emphasising that certain restrictions will only be lifted for those who are immune to the virus.

Physical distancing and mask-wearing will remain mandatory in shopping malls. Masks will also be required in enclosed areas in which people with Covid immunity may mix with people who haven’t been inoculated against the virus, such as on public transport and in shops.

Wedding receptions are limited to 200 people, while up to 50 people can attend private and family events.

Decree Codifies Rules on Next Stage of Reopening

The rules applying to the next stage of Hungary’s reopening, including those on the attendance of outdoor and indoor events, have been codified in a decree published in the latest issue of the official gazette Magyar Közlöny.

Cultural events, with the exception of music and dance events, sporting events, indoor events and outdoor events with more than 500 people can be attended by those with immunity certificates and accompanied minors.

Only people with vaccination certificates can attend music and dance events.

Professional athletes who are not immune to the virus will be allowed to compete at outdoor events with more than 500 people.

Outdoor events not considered family, private, cultural, sporting, music or dance events with less than 500 people can also be attended by those without an immunity certificate.

If more people are present, the event can only be attended by those who are immune as well as minors accompanied by immune adults.

If the event is organised indoors, it can only be attended by adults with immunity certificates and accompanied minors. Unannounced gatherings remain banned.

Hotel and restaurant managers must make sure guests are separated, while up to 500 people can attend outdoor events, including meetings, he said, adding that only people with vaccination certificates can attend music and dance events.

Vaccinated 16-18 year-olds can take part in cultural and sports events indoors, he said. Orbán said that, like in Israel and the UK, vaccine take-up in Hungary was beginning to slow down, with a “trickle” of 5,000-10,000 registrations per day.

The remaining part of the contract was for 500,000 doses but the Chinese defence ministry added 200,000 doses as a donation, Szijjártó said before leaving for Hamburg to take over Hungary’s presidency of the Council of Europe Committee of Ministers.

The aircraft made 15 round trips between Budapest and Moscow and Budapest and Beijing in the past three months transporting Eastern vaccines to Hungary, and Hungary has received more vaccines from China and at an earlier date than originally contracted,

Szijjártó said in a video posted on Facebook. The vaccines ordered from China and Russia have contributed to putting Hungary a month and a half ahead of Europe in terms of the proportion of vaccinated population, he added.

​​​​​​​“It is that much sooner that we can fully open our economy and give people back a normal life,” he said.