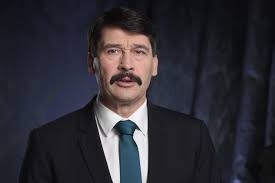 The textile industry consumed some 79 billion cubic meters of water in 2015, Áder noted. In developing countries, chemicals and dyes used to manufacture clothes are regularly released unfiltered into natural waters, polluting the environment and ruining the quality of life of those living nearby, he said.

The industry is currently responsible for 20% of water pollution worldwide, the president said. In the past years, the amount of clothes bought per person in Europe has jumped by 40%. Some 30% of them are worn only once, and a mere 1% is getting recycled, he added.

Mengyán said the United Kingdom remained the largest consumer of fashion in the EU, but peer pressure among younger people made it necessary to address alternative approaches to shopping more often in public.

Pollution can be mitigated by fewer washes and a sparing use of detergents, she said. On a larger scale, developing technologies to filter microplastics from the water in washing machines would greatly reduce pollution, Mengyán said.

Besides scientific solutions, environmentally conscious consumers and online influencers could push the fashion industry to move towards sustainability, which the government could also force or promote with regulations or incentives, Áder said.