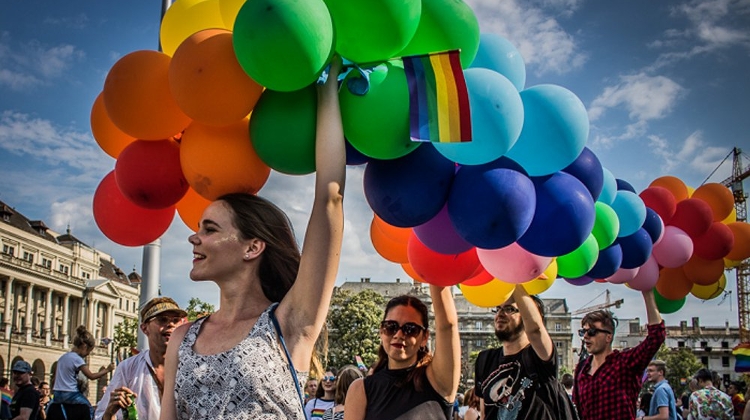 From the organisers of the march:

We’ve been through a very difficult time. Because of the coronavirus epidemic we could not protest for our rights, and we could not meet our family or friends, our recreation opportunities were significantly limited, and many people lost their jobs and livelihoods.

The LGBTQ community was particularly plagued by the pandemic: those who had been only hired for unannounced work, those who had to move out of dormitory, or could no longer pay the rent, they were not protected by anything.

The epidemic has isolated many LGBTQ people from the supportive groups and environment, and their chosen family. Many of us may have felt left alone. Slowly, it seems to be the end of this crisis.

However, there is no vaccine for everything, and not everyone has been forgotten: in the shadow of the pandemic, taking advantage of its extraordinary rights, the government has continued its infamous, exclusionary, stigmatizing campaign against the LGBTQ community.

While their media forwarded their inciting messages, they used their legal instruments to prevent single-parent adoption, and name and gender change.

The time has come to claim our future back! We should show them that we won’t give up, we won’t accept that LGBTQ people are treated like second grade citizens.

We have to stand up for a diverse, open, inclusive society. Let’s support each other in these difficult times! Let’s meet on July 24, Saturday, from 2:00 p.m.

After the March, we’re looking forward to see you at Hungary's largest LGBTQ party at the Rainbow Party in Budapest Park.

The programs start at 3pm, with speeches, music, and then the long-awaited departure! DJ Laszlo Lacika plays music from Pride's truck on the spot and during the march.

Avoid the area around the Erzsébet Bridge and the Andrássy Avenue and Bajcsy-Zsilinszky Street before the start of the March.

How should you arrive?

We would recommend that you take metro lines 1 and 2 to Deák Square and approach Madách Square from there, or arrive from Astoria. If you are coming from Nyugati Square and Oktogon, you would rather get on the Földalatti (metro line 1, yellow).

After the speeches, we start at full throttle, the march heads on Astoria, then Kálvin Square, and Fővám Square, it crosses the Duna on Szabadság Bridge, turns right to Szent Gellért Quay, and it arrives in Tabán via Döbrentei Square.

At the front of the March, after the truck of Budapest Pride, there will be that huge rainbow flag, which we made back in 2019 from your donations to protest against the homophobic speeches of Kövér László (Acting President of Hungary).

At Fővám Square you can touch the giant heart which had been exhibited earlier at Kossuth Square by Amnesty International Hungary and Háttér Society.

You should expect the following speakers in Tabán: