Opinion: Are Male Gold-Medal Winners “Not Only Champions but also Masculine Idols" as PM Orbán Suggests? 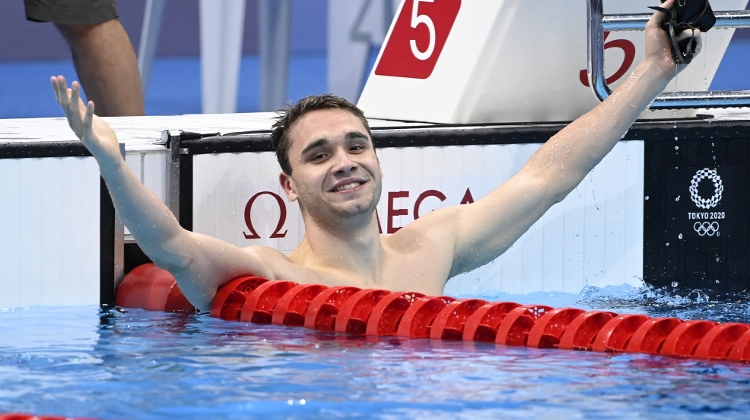 Although Viktor Orbán doesn’t think that “a prime minister should evaluate” the results of the Olympics because “it not his business,” he nonetheless entertained the nation with his golden thoughts on the subject in an interview in Nemzeti Sport.

The interview was supposed to prove that “Hungary is one of the most competitive nations,” not just when it comes to sports but also “in the economic and scientific spheres,” one of the many baseless claims we can expect from Hungary’s Pinocchio.

It is also nonsense to assert that Hungary’s Olympic performance “always says something about the state of the economy.”

In fact, there is no correlation between the two.

Hungary’s most incredible Olympic performances took place between 1948 and 1956 and again in the 1970s and 1980s, when state socialism showed signs of economic exhaustion.

The majority of people all over the world might be discouraged by the corruption and commercialization of the Olympic Games and the use of performance enhancing drugs by many of the competing athletes, but Orbán “can’t imagine anything more important than the athletes who wear the national jersey” because “they are us.”

Orbán looks upon the Olympic Games as a form of war in peacetime. “Even when there is no war, nations still want to measure their talents and strengths, a temptation that never leaves humanity.” The Olympic Games might be peaceful, but like war, it is equally “ruthless.”

For Hungary, the Olympic Games has special significance, according to Orbán, because “what can a country of ten million people contribute to humanity?”

I don’t know, but I can easily come up with several alternatives that would be more useful than producing Olympic champions.

What about nurturing top-notch scientists like Katalin Karikó so they don’t have to leave the country in order to make a tremendous contribution to mankind?

What about raising the general level of education to prepare Hungarians for the challenges of the 21st century instead of producing functional illiterates?

Orbán’s theories about the importance of the Olympics certainly didn’t strike me as compelling, but what followed was even less impressive.

The prime minister noted with satisfaction that, in comparison to the Olympics in Rio de Janeiro where “the women saved the country’s honor” by winning seven of the eight gold medals, this year “men have won all but one of the golds.”

He believes that the reason for the relative underperformance of men might stem from the challenges of the modern age, in which “the masculine virtues are not appreciated and the respect for physical fitness, responsibility for the family, and the mental and physical strength needed to care for them has almost disappeared from the world.”

That claim didn’t impress the blogger of “Rezeda világa,” who couldn’t fathom “in this day and age what physical strength is needed to take care of a family, since we don’t hunt mammoths to feed our loved ones.”

In Orbán’s eyes, the male gold-medal winners are “not only champions but also masculine idols” who can be shown off to future generations so they understand “That’s what a man looks like. That’s what his physique looks like.”

It seems that, for Orbán, the most admired male idol is little more than a piece of meat. I don’t want to be unkind, but the paunchy Viktor Orbán should be the last man to talk about the admirable physical attributes of men.

When it came to his predictions of Hungary’s chances in the Olympics, he was way off. He was hoping to earn 13 gold medals; the rest really didn’t interest him.

As he put it, “we always keep our champions, the gold medalists, in a separate category. This is not unjustified.

Because a fourth or fifth place, a bronze medal, a silver medal, is a fantastic achievement, it shows that you are among the best in the world. It is both commendable and uplifting. But the champion is in a category of their own. The Hungarian mind is well aware of that.

Finally, a few words about Orbán’s take on the possibility of Hungary’s hosting the Olympic Games sometime in the future.

A few days ago, it became known that the venue of the 2032 Olympics has already been decided.

In 2017, there was a chance that Hungary might host the Olympics in the future, but “that ship has sailed—for now. But hosting the Olympics is an eternal dream for a Hungarian.” I wish he stopped talking in the name of all Hungarians.

In 2017, it became clear that a lot of Hungarians had no intention of spending a good chunk of the country’s limited resources on hosting the Olympics in Budapest.

Over 200,000 people expressed their desire to hold a referendum on the issue. Therefore it is not true, as Orbán claimed, that “for petty reasons, for political gain, we have now been prevented from hosting the Olympics, but this dream cannot be taken away from the Hungarians.”

In actual fact, it was Viktor Orbán who, fearing that a referendum would most likely kill his Olympic dream, threw in the towel and unwittingly did a favor to the country and its people.