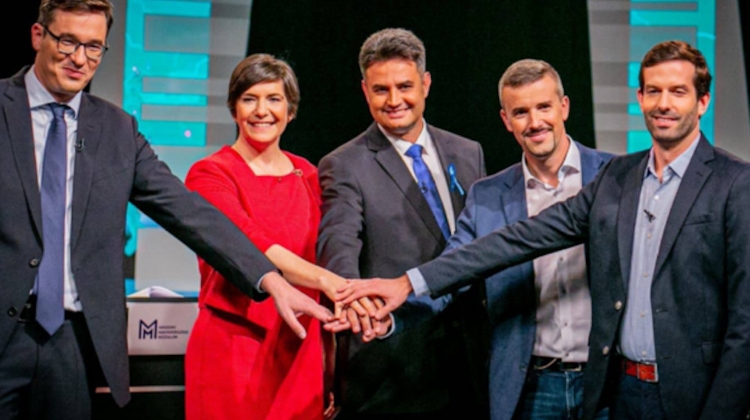 By the time the news broke on Friday that Klára Dobrev will face a single challenger, namely Péter Márki-Zay, in the second round of the primaries to choose the opposition prime ministerial candidate in next year’s elections, the weeklies were already on the newsstands.

They could therefore not react to Gergely Karácsony’s withdrawal from the race, but most did comment on Márki–Zay’s surprisingly successful performance.

One of the victims of Karácsony’s sudden decision to give up the race is Demokrata’s editor András Bencsik who, in his weekly editorial, describes the Budapest Mayor of the capital as the pre–ordained winner of the primary.

In Mandiner, Gergely Szilvay claims that whoever becomes Prime Minister if the opposition wins the elections, that person will have to do what the DK says, because Mr Gyurcsány’s party will have the largest left-wing group in Parliament.

If nevertheless the DK is not able to get its way, the government will resemble a cart driven in opposite directions by three horses, he predicts. As for Mr Márki-Zay, Szilvay describes him as too left-wing for right-wingers and too right-wing for left-wingers and thus doomed to find himself in a political no man’s land.

In its customary first page editorial, Magyar Narancs admits that Péter Márki-Zay may be disliked by many left-wing voters, but urges them to support him wholeheartedly if he wins the primary. Under usual conditions, the editors continue, the Prime Minister is chosen by the largest parliamentary group, but opposition supporters must accept the outcome of the primary, whichever candidate triumphs, in order to keep the disparate forces of the opposition united.

In Jelen, editor Zoltán Lakner explains why Mr Márki-Zay opposes Ms Dobrev’s candidacy. His main problem is that if she wins the primary, the Democratic Coalition will find itself in a dominant position within the opposition alliance.

A second reason why Márki-Zay believes he is a better candidate to beat Prime Minister Orbán next year is that Ms Dobrev’s image is inseparable from that of her husband, DK leader Ferenc Gyurcsány who is unpopular among uncommitted voters whose support would be indispensable to send the incumbent government packing.

Heti Világgazdaság devotes two opinion columns to the primary with both dedicating a few lines to Márki-Zay. Árpád W. Tóta believes integrating Márki-Zay and his supporters into the opposition camp ‘may be the key to victory’.

He finds it vital for the opposition to offer conservative voters an alternative to Fidesz. Márki-Zay, he remarks, could not do the job on his own and, for the moment, there is no organised movement behind him.

István Dévényi, who is a staff writer at Magyar Hang, warns this time in Heti Világgazdaság that should Klára Dobrev win the primary, he and many hundreds of thousands of uncommitted voters would not find themselves represented by the opposition. Luckily enough, he continues, Márki-Zay represents an alternative that can be accepted by centrist people like himself. He takes that possibility as being the main merit of the opposition primary.

In 168 óra, Richárd Szentpéteri Nagy, a well-known critic of the opposition primary, reiterates his position that the accusations hurled by the competing personalities at each other may have created lasting divisions within the opposition alliance.

Although the second round of the primary will last until the end of the week, he already urges the supporters of all candidates to put the wounds they have suffered during the primary campaign behind them, as soon as possible.

Karácsony withdraws from the primary race

A pro-government daily reads Gergely  Karácsony’s decision to withdraw from the opposition primary as proof that he is a failed politician. A left-wing analyst lambasts him for releasing a string of contradictory statements.

After promising to agree on which candidate would withdraw from the race, then trying to run in tandem, then announcing that they would compete with each other, the mayors of Budapest and Hódmezővásárhely held an open-air press conference on Friday at which Karácsony declared that he would withdraw his nomination.

In an unsigned article, Magyar Hírlap suggests that it was Karácsony’s poor performance over the past two years as Mayor of Budapest that sealed his fate in his bid to become the opposition front runner in next year’s election. His withdrawal is depicted as all the more humiliating, as he repeatedly refused to step back since last Sunday.

Magyar Hírlap claims the real winner of all this is DK leader Ferenc Gyurcsány, who has thus destroyed a third potential challenger as leader of the opposition (after Momentum leader Fekete-Győr and Jobbik chairman Jakab who fared poorly in the first round of the primary).

The pro-government daily predicts that in case Márki-Zay defeats Klára Dobrev (Gyurcsány’s wife) in the primary run-off next week and becomes PM next year, Gyurcsány will find it easy to rein him in or dispose of him.

On Klubrádió, political analyst and Jelen editor Zoltán Lakner describes Karácsony’s and Márki-Zay’s performance this week as unprofessional. He believes they shouldn’t have made definitive declarations about their intentions before agreeing properly.

Their daily, contradictory statements put their supporters on a virtual rollercoaster and may have discouraged many followers, Lakner worries.

A pro-government columnist thinks that the opposition candidates have so far failed to outline their political vision. An alt-left commentator criticizes Márki-Zay for endorsing liberal pro-market ideologies.

In Magyar Nemzet, Károly Pósa thinks that the opposition candidates do not have a proper vision. In the pro-government columnist’s view, frontrunners in the primaries as well as intellectuals discussing the primaries have so far failed to come up with a comprehensive political program that could serve as an alternative to the current government’s ideology.

Instead of outlining their plans, opposition candidates repeat random slogans and empty promises, Pósa contends. He concludes by suggesting that the in-fighting witnessed in recent days within the opposition, is orchestrated by former PM Gyurcsány, the ‘puppet-master’.

Kiss thinks that Márki-Zay is wrong to promise further tax cuts for families and also to keep the flat rate of income tax. He goes on to note that in order to improve the chances of the common man and woman, the new government should not only end corruption, but also distribute wealth more evenly.