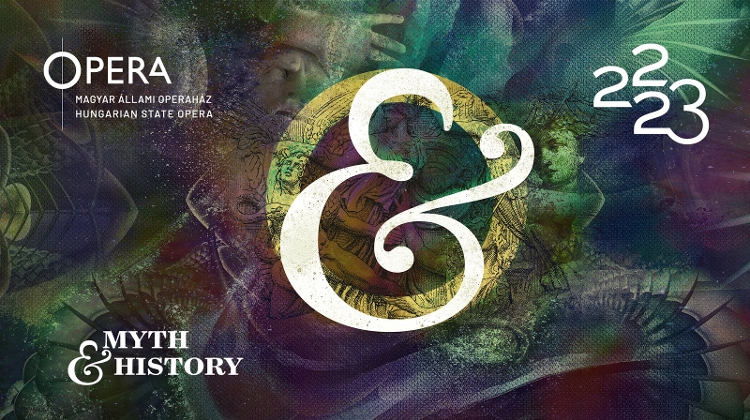 The Hungarian State Opera has announced its 2022/2023 thematic season titled Myth & History. The OPERA awaits the public in the renovated Ybl Palace on Andrássy Avenue with numerous new functions and services, new publications, as well as a chamber exhibition open until 28 March.

The programme of the OPERA’s 139th season features over 500 theatrical shows played in two locations, including 53 repertoire pieces and 16 new productions with 10 feature shows among them.

The 2022/2023 season of the OPERA was inspired by the interconnected layers of myths and history, with several of its premiering productions being based on dramatic historical events.

Iván Madarász was commissioned by the OPERA to turn Zoltán Fábri’s screenplay into an opera titled The Fifth Seal, set at the time of the Arrow Cross Party’s terror and the Siege of Budapest, the premier of which is directed by János Szikora.

The Hungarian premier of Prokofiev’s War & Peace is brought to the stage by Calixto Bieito in co-production with the Grand Théâtre de Genève, and the Opera House is also preparing a new premier of Tosca.

There are two Mozart operas to return to the theatre’s repertoire after a long hiatus: the audience had to wait over 40 years to see Idomeneo, King of Crete and over 30 years to see The Pretend Garden-Girl at the OPERA again.

Both of them are directed by artistic director András Almási-Tóth, the latter for the stage of the Eiffel Art Studios, in co-production with Opera Neo in San Diego.

The theme of the season naturally suggested several Baroque works rooted in Antique culture or set in the era of the Crusades to be premiered at the OPERA, and so Szenteczki Zita will adapt the 2016 direction of Gluck’s opera Orfeo & Euridice she did during her studies at the Liszt Academy for the stage of the Eiffel Art Studios, where Purcell’s Dido & Aeneas will also be played under the direction of Dóra Barta, as well as a production of Monteverdi madrigals by Tulassay Ádám titled Tancredi & Clorinda.

For a special séance of Advent, pianist Tamás Érdi brings a story relevant to the Three Wise Men, György Selmeczi’s Artaban to the stage based on the concept of general director Szilveszter Ókovács, and after several seasons’ delay, Mária Harangi directs two one-act pieces of similar subjects by contemporary Italian composer Giampaolo Testoni, Fantasio & Fortunio, the original 2018 premier of which were performed by the OPERA in Teatro Coccia in Novara.

As part of the Ministry for Human Capacities’ Ervin Lázár Programme, Toronykőy Attila directs Puccini’s opera under the title Schicchi 2.0 for the upper classes of primary school, while John the Valiant returns to the stage directed by Máté Szabó to celebrate the 200th anniversary of Sándor Petőfi’s birth. In connection with the bicentennial year, the OPERA Orchestra will perform Jenő Hubay’s Petőfi Symphony, and will create a public recording of Simple Steve, Béla Szabados’s musical popular play commissioned by the OPERA 100 years ago. The piece will be performed together with Péter Tóth's madrigal comedy entitled A helység kalapácsa based on a work by Sándor Petőfi.

The Hungarian National Ballet is preparing the Hungarian premier of Boris Eifman’s feature ballet The Pygmalion Effect, as well as new interpretations of two Bartók ballets: ballet master László Velekei’s choreography of The Wooden Prince and principal ballet master Marianna Venekei’s choreography of The Miraculous Mandarin. In addition, such monumental classical ballets will be included in the ensemble’s repertoire again as The Taming of the Shrew, Don Quixote and Swan Lake, which could not be performed during the renovations of the Opera House. The Nutcracker will move back to the Ybl Palace with 28 shows, and Mayerling, to be premiered this year, will also be included in next year’s programme.

The essence of the season will be the thematic festival held in May again, which will be titled Festival pf Myths this year. It will mainly feature ten shows mostly inspired by Antiquity, including repertoire pieces such as Elektra, Iphigenie auf Tauris, Ariadne auf Naxos,and of the ballet productions, Troy Game & Troy Game – with Amazons.

It also fits in well with the theme of the season that the OPERA will add the entire Ring Tetralogy by Wagner to its programme in November 2022. Directed by Géza M. Tóth, the work will be interpreted by Hungarian artists, with the only exception of the role of Loge, which will be sung by guest artist Adrián Eröd, also of Hungarian descent.

As a prelude to the Myth & History season, Italian tenor Fabio Sartori is invited to star in the park concert of Eiffel Art Studios in August. In War & Peace Anna Shapovalova (Natasha) will be the guest star, while in Die Entführung aus dem Serail Eva Bodorová (Konstanze) will join the production, who also has Hungarian roots.

Following her great success this year, Angela Nisi (Mimì) returns to La Bohème, while the title role of Otello will be played by Walter Fraccaro and Carlo Ventre. As a real curiosity, countertenor Rodrigo Sosa Dal Pozzo will appear in the shows of Orfeo & Euridice singing the title role and conducting the production as well.

The OPERA also launches a new series titled Stars with a Piano, in which aria and song recitals are given by internationally recognized artists such as Ildar Abdrazakov, Ferruccio Furlanetto, Simon Keenlyside, Julia Lezhneva, Waltraud Meier, Olga Peretyatko and Ramón Vargas.

The OPERA does not forget about its own stars either.

It is going to celebrate Éva Marton’s 80th birthday with a gala concert, while Gyöngyi Lukács and Ildikó Komlósi will have 3 solo recitals each at the Eiffel Art Studios as a continuation of the series started this year.

The OPERA will also hold a gala to wish happy birthday to eight of its artists celebrating their jubilees this year. At the recital, Gábor Bretz, Attila Fekete, Péter Kálmán, Ildikó Komlósi, István Kovács, Andrea Rost, Bernadett Wiedemann will appear on the stage, as well as Eszter Sümegi, the organizer of the evening.

As usual, the next season of the OPERA is full of tours and guest performances. The last show of Viktor Nagy’s Tosca production can be seen on Margaret Island in the summer of 2022, the OPERA Orchestra will accompany the gala recital of Russian lyric soprano Aida Garifullina conducted by Pier Giorgio Morandi, and they will be joined by the Chorus for a concert performance of Verdi’S OPERA Attila.

In the summer of 2022, ensembles and soloists of the OPERA will take a concert-like cross section of Háry János to Gyula,to the Valley of Arts festival and to Tata, and also to Beregszász—if the war in Ukraine permits.

The OPERA’s production of Bánk Bán – The Viceroy Bánk will be brought to the stage of the Romanian National Opera in Bucharest in June 2022, then its concert version will be taken to Mumbai in October, to be played at the National Centre for the Performing Arts along with a stage version of Die Fledermaus and a Hungarian chamber recital.

The OPERA’s company will also go on a ten-stop Japanese tour with Die Zauberflöte, during which the OPERA Orchestra will give several Beethoven concerts. As for outstanding Hungarian conductors, general music director Balázs Kocsár is to conduct his first Ring apart from several other productions as will do principal conductor Gergely Kesselyák.

Doyen Ádám Medveczky, János Kocsár and István Dénes will also return alongside a row of talented young conductors. The ensembles of the OPERA will perform the greatest oratorical masterpiece, Mahler's Symphony No. 8 under the baton of Zsolt Hamar and in the 2023 cultural capital Veszprém by Gergely Madaras.

The OPERA scheduled several new publications for the reopening too. Co-authors literary historian Zoltán Chehy and music historian and critic Ferenc László present 138 pieces of opera repertoire in their work dedicated to the 138-year-old Opera House.

For this grand occasion, the Hungarian National Ballet updated its album showcasing its diverse repertoire, for which the photos were taken by László Emmer again. The new edition includes a study of dance history written by Márk Gara.

Moreover, the Hungarian Post celebrates the renovation of the Opera House by issuing a promotional stamp in 35,000 copies, available from 12 March 2022. The stamp is designed by Attila André Elekes.

Subscription sales for 2022/23 will start between 21 and 23 March 2022 in the Opera House Foyer and online, first exclusively for subscription holders.

New subscriptions can be purchased online from 24 March and in the Opera House until 25 March, then at the Opera Sales Centre in Hajós Street and at the Eiffel Art Studios from 28 March until 30 June.

Single tickets for the performances of the Myth & History thematic season will be sold from 1 July 2022.