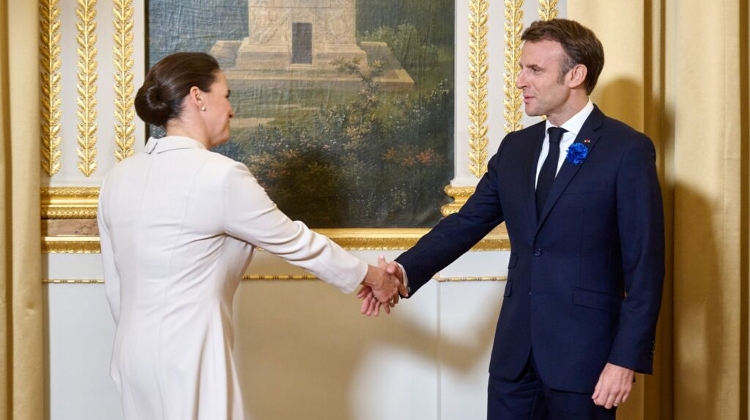 “I trust that we will work together to bring down the obstacles on the path to peace,” Novák said in a post on Facebook on Saturday.

On Saturday, Novák visited the National Museum of Immigration and saw the exhibition Paris and Nowhere Else, a show of 24 foreign artists who made international careers in the French capital.

Among the featured artists were the Hungarians Victor Vasarely, Judit Reigl and Vera Molnár.

Novák was guided through the show by Pierre Vasarely, Victor Vasarely’s grandson, along with the museum’s director and the exhibition’s curator.

"We must work to remove obstacles in the way of peace," the Hungarian president told the 5th Paris Peace Forum on Friday.

In her address, Katalin Novák noted that Hungary had firmly condemned Russia’s attack on Ukraine from the beginning, and said this position had not changed.

Novák said that the longer the war drags on, the harder it will be to achieve peace, while greater destruction and suffering leads to an escalation of the war. She pointed to a lack of “genuine will” for a ceasefire and peace talks, as the warring sides do not acknowledge that fighting will not bring peace any closer.

She regretted that there was “no sufficient and firm intent to mediate between the parties” while “disinformation hinders agreement and causes serious damage”. She said deliberate provocations were delaying a solution, and “Russian President Putin is talking about territorial claims laid by European states in an effort to create confrontation between countries”.

Novák warned of an impending nuclear threat, adding that threats of compromising energy and food supplies were “unfair”. She also said there was no shared “strategic thinking”, adding that inciting ethnic tensions and attacks against minorities were “but deepening wounds and hindering understanding”.

“What we need is a strong and successful Europe,” President Katalin Novák said after talks with Gérard Larcher, president of the French Senate, in Paris on Friday.

Held ahead of the International Peace Forum, the bilateral talks focused on topical challenges, Novák said on Facebook. After their talks, Novák and Larcher issued a joint statement, Novák’s office told MTI.

The meeting provided an opportunity to review topical EU-related and bilateral issues, the Russian aggression against Ukraine and the impacts of the war, the office said in a statement. Novák expressed hope that the two countries would in future deepen their relations in the spirit of pragmatism.

Larcher highlighted Hungary’s “unique mission” within the European Union and the importance of relations between the two countries.

Novák also held talks with Serbian President Aleksandar Vučić, whom she referred to as “an old friend, a strategic partner”, and said she was looking forward to “welcoming Serbia as a European Union member”.