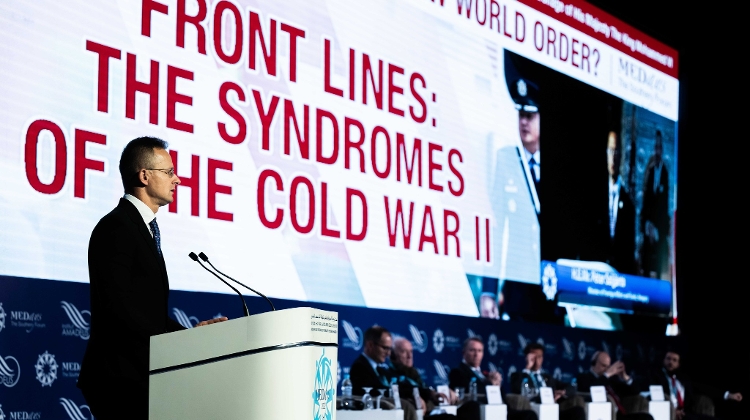 The current situation on the global political stage poses a serious danger to the world unless common sense prevails, Foreign Minister Péter Szijjártó told an international conference in Tangier, Morocco.

The East and the West should therefore reopen their communication channels, Szijjártó told a panel discussion at the MEDays Forum, according to a foreign ministry statement, adding that communication had often been enough to avert another world war during the Cold War.

Hungary considers 2022 “the year of big disappointments”, Szijjártó said. He said the “legitimate expectation” that the end of the coronavirus pandemic would be followed by a less difficult period had turned out to be a “naive illusion” because a war had broken out in Ukraine.

Szijjártó urged the reopening of communication channels in the interest of settling the conflict. “Because if the communications channels are given up, then the hope for peace is being given up as well,” he said.

The minister said the Cold War had been better in this respect because the opposing sides had been in constant communication.

“We Hungarians really do try to maintain dialogue with the Russians, but whenever we do so, we always are faced with enormous unfair and vehement attacks” labelling the country “the spies of Putin, the allies of the Russians, the breakers of European unity”, Szijjártó said, adding that Hungary only wanted to maintain communication.

Szijjártó said those who believed the war could end with talks between Ukraine and Russia were “naive”, arguing that dialogue between Russia and the United States was needed. He said everything must be done to avoid a direct confrontation between NATO and Russia, arguing that such a conflict could lead to a third world war.

Szijjártó said the Cold War had been “terrible” for central Europe, adding that the current global political situation carried similar threats “unless common sense can prevail and the voice of those who want peace will become louder”.

He said that as a neighbouring country of Ukraine, Hungary had a vested interest in peace also because Europe was facing increasingly serious economic problems which were being aggravated by the European Union’s “failed sanctions”.

He argued that the sanctions had failed to live up to expectations because the war was becoming increasingly brutal while the European economy had spiralled into crisis.

Because Hungary does not want to get dragged into the war, it has decided against delivering weapons to Ukraine and is the only EU country not taking part in the bloc’s mission to train Ukrainian troops, he said.

“Of course, for these two decisions of ours we are under very, very heavy and severe attacks on a daily basis politically and media-wise as well,” Szijjártó said. “The voice of escalation is much louder than the voice of peace.”

International institutions have so far failed in the Ukraine war because they deepened the conflict rather than ensuring a platform for the warring parties to engage in dialogue, Foreign Minister Péter Szijjártó said in Tangier.

Szijjártó told a panel discussion at the MEDays Forum that “multilateralism has not passed the stress tests” of the coronavirus pandemic and the war in close succession. International organisations were “slow waking up” during the pandemic, and now they can’t seem to ensure a platform for the talks to settle the crisis in Ukraine, he said.

“I’m representing a country, Hungary, [which is] usually attacked for not following the mainstream, but represents interests which are specifically Hungarian and are based on national interests,” he said.

The government’s responses to the crises were successful, and Hungary emerged strengthened from both ordeals, he said. Hungary orchestrated the swiftest vaccination campaign during the pandemic because the government did not wait for a joint response and ignored political or ideological considerations when green-lighting vaccines, he said.

Regarding the war in Ukraine, Szijjártó said Hungary, as a neighbouring country, had a vested interest in brokering peace in the region, and “that’s why Hungary is super concerned that the world is running totally in the other direction,” he said.

Currently, most statements run the risk of escalating the conflict, “but hardly anybody talks about peace”, he said. He said there was no immediate communication between the warring parties, and multilateral institutions had failed to create a platform for dialogue.

Szijjártó insisted that the UN had been unable to achieve dialogue, an institution that was created to be a “last resort for negotiations”.

“We see … that multilateral institutions are … misused to deepen this conflict,” he said. “The politicisation of these organisations is a serious mistake, and ruining platforms of dialogue” was “almost a sin”, he said.

The UN was not created for dialogue between like-minded countries but to offer a platform for negotiations between warring or enemy countries, he said.

Noting the “attacks” after he was the only European foreign minister to meet his Russian counterpart on the sidelines of the UN General Assembly in September, Szijjártó said it seemed “there are strong forces in the world against opening the communications channels.”

Hungary will not accept EU sanctions that threaten its energy security, the foreign minister said in an interview at the weekend.

Péter Szijjártó noted that the war in Ukraine has lasted for eight months so far and the European economy “is struggling”.

Household income is worth less and less owing to sanctions-fuelled inflation, he added in an interview to public radio. He said the mere mention of a new EU sanctions package had prompted another rise in gas prices on the world market.

The new package, the ninth, reportedly covers nuclear power, he said, but this is a red line for Hungary, the foreign minister added. Hungary’s sole nuclear power plant covers a third of Hungarian energy output, Szijjártó said, adding that the Paks plant’s expansion would lock in caps on household energy bills.

He noted that nuclear fuel rods are supplied solely by a Russian manufacturer, and the fuel rods are a guarantee of Hungary’s energy security in the long term, he added.

The minister emphasised the importance of dialogue “between the great powers” with the aim of securing peace between Russia and Ukraine. Russian-American communication channels are needed to end the war through negotiations, he said.