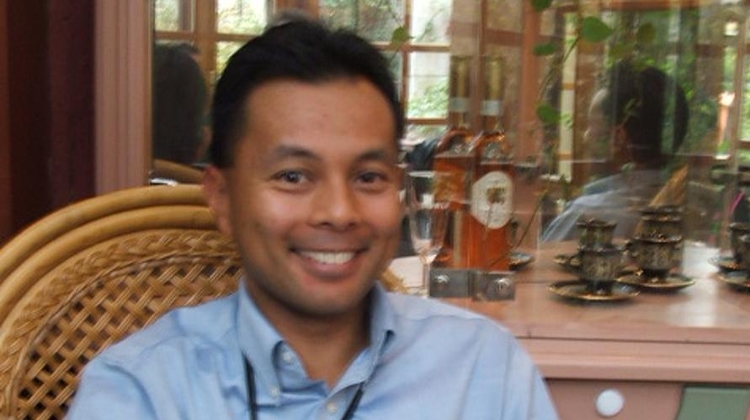 After achieving two degrees, one in Economics and one in German, Dennis Diokno went straight into a Masters program in International Management. Having completed his Masters, Dennis found the U.S. job market slow, so he applied for a Visa and headed to Moscow. It only took him six weeks to find a job, choose a place to stay, and develop a passion for expat living.

From Moscow, work sent to Dennis to Beijing where he spent a few years before heading back to the U.S. in 1996. While consulting for a health care company, Dennis was sent to Budapest to do a feasibility study.

That trip led to his decision to start his own health clinic, First Med Centers which has been an expat institution since the day it opened. At present, Dennis is working on plans to take the business into other Central and Eastern European markets.

Dennis lives in Budapest with his wife, Ildikó, and his young family.

1. When did you arrive in Hungary and what brought you here?
I first came to Hungary in 1996. I came here to do a feasibility study for a large health care company. They decided not to invest, so I took what I had learned and started a clinic myself.

2. Have you ever been an expatriate elsewhere?
Yes. I lived and worked in Moscow in 1993. I spent part of the mid-90's in Beijing. And, I was lucky enough to spend some time working in the Maldives.

3. What do you hope to accomplish, personally or career-wise, during your stay in Hungary?
Career wise I feel fortunate to be able to say that I've accomplished most of what I set out to do. The business is well established, and I am happy that we are able to give back to the community by supporting non-profits and community events. As for what's next, we are currently looking for investors to help with our planned expansion to Prague, Warsaw, and Bucharest.

4. What surprised you most about Hungary?
The difficulty of the language. I studied German in H.S. and University. I even majored in German lit. I also took intensive Russian when because I lived in Moscow and I learned basic Chinese when I was in Beijing. Even Chinese was ten times easier than Hungarian. The length of the words and the order you put words in to build a sentence is very challenging about Hungarian. However, having said this, I think there is a certain logic to Hungarian that I've grown to appreciate.

5. Friends are in Budapest for a weekend--what must they absolutely see and do?
A lot of my friends are golfers, so they'd have to see the golf course-Pannonia. We have one of the best in Central and Eastern Europe. As far as traditional tourist sights, I've always liked the view from the banks of the Danube at night' either side.

6. What is your favourite Hungarian food?
Töltött Paprika (Stuffed Peppers).

7. What food from home do you miss the most?
I've been stopped at customs returning from the U.S. with a suitcase of food several times. Specifically, I miss Mexican food. Actually, I really miss Taco Bell! When I first moved here I was at Iguana's 3-4 times a week. My record was 12 days in a row. I also miss Dunkin' Donuts.

8. What is never missing from your kitchen?
Chili powder and the ingredients to make a good homemade chili.

9. What career other than yours would you love to pursue?
I'd love to be a professional golfer-on tour or as a teaching pro.

10. What's a job you would definitely never want?
I would absolutely never want to have my job in the States. The health care system in the U.S. is extremely complicated. It creates all kinds of headaches that I just wouldn't want to deal with.

11. Where did you spend your last vacation and where do you hope to spend your next one?
My last vacation was a quiet couple of weeks with my family in my hometown of Ann Arbor, Michigan. Next time we're going to sunny Florida for Golf and Disney World...

12. What was your favourite band, film, or hobby as a teen? What was unique about you then?
I was really into Prince and the Revolution. I had the ruffled shirts. I had the long curly hair going. Fortunately the photos have been misplaced. It was a real phase.

13. What can't you resist?
An invitation for Golf. My wife would say surfing the net. I like reading the news online and the one thing leads to another. I feel fortunate to be living abroad in the internet era. There is so much information available that we didn't have 10 years ago. When I was in Russia and China it was tough to keep up on things. Now I can go online and get any kind of news I want. I can even follow my university golf team.

15. Decaf or regular?
Definitely regular. We drive to Vienna from to time to time to reload on Starbucks.

16. Book or movie?
Have to say both. Movies can't convey certain things that a book does, but no book could take the place of an action film.

20. What would you say is your personal motto?
'The needs of the many far outweigh the needs of the few or the one.' I guess I'm giving myself away as a bit of a Trekkie here' Spock said this at the end of Star Trek II. It really applies to my profession, and to life in general.