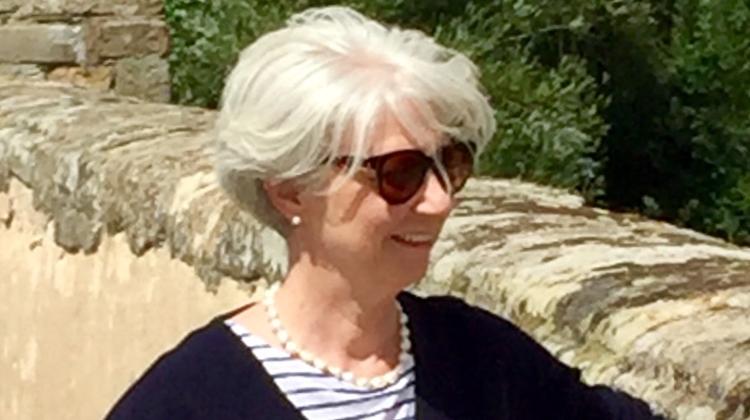 I first visited Budapest in 1982. I came with some friends on the overnight train from Warsaw, where I was working at the British Embassy. Howling dogs and misty border crossings - it was like living in a John le Carré novel. Budapest was shrouded in freezing fog all weekend but I still fell in love with the city.

Coming back to live here 34 years later really was a dream come true. I have a very soft spot for Central Europe. I met Iain in Poland when we were both on our first diplomatic posting.

We married and managed to maintain two diplomatic careers for many postings. I am still a member of the Diplomatic Service but I have, over the years, added other strings to my bow. I'm an English teacher and I do a bit of writing. We have one son who lives and works in London. I'm delighted to say that he loves Budapest and he visits often

Now, I'm President of Diplomatic Spouses of Budapest and I'm very busy as part of the team organising the Diplomatic Fair on Sunday 26 November 2017  at the InterContinental Budapest. It's a great day out and all the money raised is donated to finance specific projects at four Hungarian children's charities.

Shortly after the Fair is over, we will have a new member of the family to keep me busy. Juno is a rescue dog of very indeterminate heritage. We're looking for a rescue kitten too.

1. When did you come to live in Hungary and what brought you here?
In March 2016, I came because my husband was appointed British Ambassador to Hungary.

2. Have you ever been an expatriate elsewhere?
Yes, this is our eighth overseas posting. I am a diplomat too but now I am on a career break. My first posting was Warsaw in 1982, where I met Iain. We have also been posted to Japan twice, Australia, Romania, Hong Kong, and Bahrain.

3. What surprised you most about Hungary?
I love the usual sights, and was surprised by the quality of the wine.

4. Friends are in Budapest for a weekend - what must they absolutely see and do?
We have a standard tour for friends. We walk to our local market, then take the number 4 or 6 tram across the river and enjoy the view. Afterwards we get on the number 2 tram and we go to the Central Market, where our visitors might try lángos.

Then we go to Centrál Kávéház in Pest, my favourite cafe here. After that, it varies. Maybe a stroll along Andrassy and dinner on the Duna Corso. There is so much to see here; there's never a problem filling a weekend. Budapest is magical.

5. What is your favourite Hungarian food?
At the moment it's goose thanks to St. Martin’s Day.

6. What is never missing from your refrigerator?
A lot. Always cheeses. Hungarian but also a good British Cheddar. And a lot of vegetables, fruit, and a bottle of Hungarian wine.

7. What is your favourite Hungarian word?
Fogalmam sincs (I have no idea).

8. What do you miss most from home?
Other than the obvious, friends and family, I am a Londoner and, wherever I am in the world, I miss my home town. It's so genuinely cosmopolitan and has wonderful city centre parks. I was there in September and will go back in December to do some Christmas shopping.

9. What career other than yours would you love to pursue?
A writer. I was an English teacher, and in Bahrain I used to write a column for a local newspaper.

10. What's a job you would definitely never want?
I do not want to be a prime minister anywhere.

11. Where did you spend your last vacation?
In Slovenia – we spent a week there at the end of summer doing lots of walking.

12. Where do you hope to spend your next holiday?
I really want to go to Morocco soon.

14. What was your favourite music, film, or hobby as a teen?
Music: I am a big Motown soul music fan, and I like Cliff Richard - I can't count how many of his concerts I've been to.
Movie: 'Some Like It Hot’ with Marilyn Monroe, Tony Curtis, and Jack Lemmon.
Hobby: I was quite sporty. I used to do cross country running, and I played hockey and netball

15. Red wine or white?
If I had to choose one I would choose red, but I’d rather not choose.

18. Which social issue do you feel most strongly about?
The terrible plight of child refugees.

20. What would you say is your personal motto?
”Be yourself, everyone else is taken.” Oscar Wilde