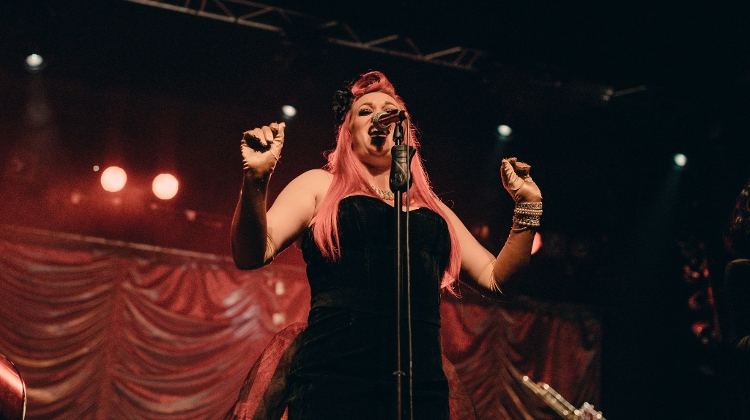 Dani has been seen singing, dancing and performing all over the world. She has had tremendous successes singing for such events as The Primetime Emmy’s Governor’s Ball, The Oscars Governor’s Ball, NFL Super Bowl VIP Party, and VH1 Top 20 Countdown, to name a few.

Originally from Detroit Michigan, she was born to parents who are both musicians and it was clear from a young age Dani was going to go places.

When you hear her sing you will know why she is a force to be reckoned with.Vocal phenom Dani Armstrong has received countless standing ovations for her stunning performance of this Scott Bradlee arrangement on tour with PMJ.

PMJ has exploded on the internet and has been growing its fans. How is the feeling of belong to a successful team?

Being a part of postmodern jukebox is really a dream come true for all of us! Connecting with their fans night after night is just the best feeling in the world.

What and when was your first work together?

I personally started with postmodern jukebox in 2016, however they had been going strong for about 5 years at that point!

Where are you making the clips that we see on Youtube?

We make our YouTube videos right and Scott Brothers living room!! It really is such a fun family feeling.

How is to work with Scott Bradlee?

We love working with Scott! There's so much about the music and the musicians in this project!

Is the same team working on the European tour or is there a replacement?

The fun part about touring with pmj is there's always surprised cast members and changes and you're never quite sure that you're going to see! I think that is what keeps audiences coming back time and time again!

Scott Bradlee do usually choose songs or this is also a teamwork?

Scott usually select the songs for YouTube with the singer that would be singing it. We sit down and cannot go over our favourite songs as well as songs as we think our friends would love to hear!

How long does it take to prepare for the tour *?

We have about 3 days of rehearsal before each tour. As you can imagine there are three very busy days!

Who and what inspires you?

We have all been on a long break due to covid-19 and I think being back on stage in front of audiences is exactly what inspires us all each night!

What songs will you sing in Budapest?

I can't quite let this secret out is our shows are always evolving and changing and we'll of surprising their audiences with some of their favourite tunes!