Katy Perry's Video Made In Budapest 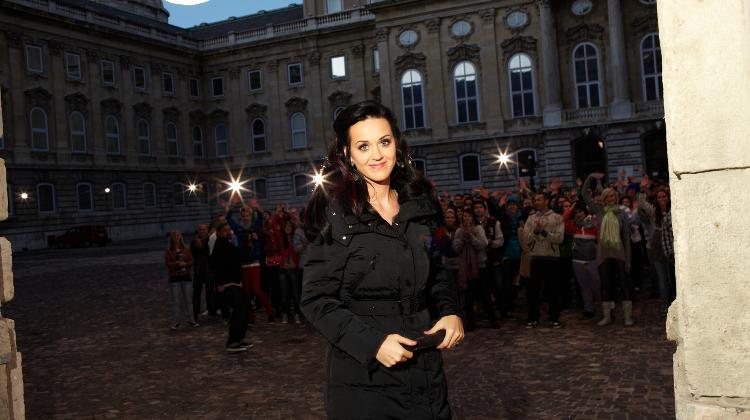 Katy Perry and Deutsche Telekom provided more than 250 winning fans with the once-in-a-lifetime chance to participate in her official music video for upcoming single ‘Firework’ and on October 8th, a unique TV commercial that documents these memorable moments for fans will premiere in select Deutsche Telekom European markets.

Traveling by bus, plane, car or train, the largest amount of fans to ever be a part of a music video gathered in Budapest at the end of September to share in this memorable opportunity provided by the partnership between Katy Perry and Deutsche Telekom. The documentary-style TV commercial follows select winners from leaving their doorsteps to their arrival in Budapest and participation in the video with Katy and hundreds of other Deutsche Telekom recruited fans. These once-in-a-life time moments were captured throughout the winners’ journeys and visually reinforce Deutsche Telekom’s brand claim ‘Life is for Sharing’.

‘Katy’s Project: Pop Video’ has been a highly visible campaign throughout eight participating Deutsche Telekom European markets. Since early August, the markets have been recruiting fans to share their special ‘spark’ for a chance to participate in the ‘Firework’ video through a TV commercial with Katy, dedicated websites and social media initiatives. Each country chose their own way to recruit fans such as by video entries judged by a combination of public and high-profile juries or the creation of raffles and online contests. Voting was a significant part of deciding the final participants and Katy herself chose some of the winners for special roles in the video.

An astounding total of almost 38,000 entries were received across the markets with thousands of fans posting messages and comments on fan pages while generating an organic following for the campaign. Participating Deutsche Telekom markets included Germany, Austria, Hungary, Czech Republic, Slovakia, Poland, Macedonia and Montenegro. The official video for ‘Firework’ will be available on Deutsche Telekom’s online portals in the eight markets three days before its global premiere around the end of October. Additionally, the lyric video will premiere exclusively on Deutsche Telekom music portals in the eight markets from October 8th to 11th, which will provide fans with a first look at images from the ‘Firework’ video.

“‘Firework’ is the most important song for me on the record because I feel like this song can be adapted by so many different people in so many different situations in their lives,” said Katy Perry. “It’s been a fantastic partnership with Deutsche Telekom and it’s been a great way to include people that are interested in me, my music and my music video.”

“Deutsche Telekom’s collaboration with Katy Perry has been an amazing success and a remarkable way for us to bring the brand promise ‘Life is for Sharing’ alive in a truly memorable way,” said Wolfgang Kampbartold, Vice President International Communication & Sponsoring at Deutsche Telekom. “Not only did we connect this group of fans to their favorite artist for a first-ever experience but we also provided a way for them to connect with each other to share their experiences, which is what the products that Deutsche Telekom provides its customers are all about.”

The ‘Firework’ video was directed by Dave Meyers, one of the most distinguished and sought after directors who has directed more than 200 music videos with artists ranging from Jay-Z and Pink to Britney Spears and Justin Bieber. Meyers has won 11 MTV Video Awards and numerous industry accolades for his work. After a selection process that involved approximately 10 well-known directors, Katy chose the idea provided by Meyers because of its inspirational tone and its ability to involve all of Deutsche Telekom’s recruited fans to participate.

Bringing more than 250 winners from eight different countries to Budapest for the video shoot was not only a logistical accomplishment but a way to prove that ‘Life is for Sharing’ is a brand promise that extends across borders and fits to people’s life experiences. Deutsche Telekom’s Connected Life & Work products provide customers with a seamless experience of using multiple devices as they move from one life situation to another. Being able to share life’s memorable experiences no matter how big or small is the motivating factor behind the company’s products.

To further unite this special group of people, the interactive website Katysproject.com was launched to provide a way for the winning fans to learn exclusive details of the video shoot and be a part of a global ‘hub’ for sharing experiences. Fans have created their own profile pages, tapped into the site’s forum and have been able to watch a video message from Dave Meyers about the shoot.

As part of the overall partnership, Deutsche Telekom has also been the exclusive sponsor of four of Katy’s record release concerts in Berlin, Budapest, Warsaw and Vienna.

‘Katy’s Project: Pop Video’ is a part of a series of highly successful campaigns first launched in 2008 by Saatchi & Saatchi to bring to life Deutsche Telekom’s brand claim ‘Life is for Sharing’.

All of the campaigns in the series have provided ways for people to be apart of the action and share memorable moments with others. Campaigns have included the ‘Dance’, ‘Rain of Flowers’ and ‘Sing-Along’ with Pink, which recently won silver for the EACA Euro Effie Awards.

On October 8th, the documentary-style TV commercial of the video shoot will premiere in select European markets."