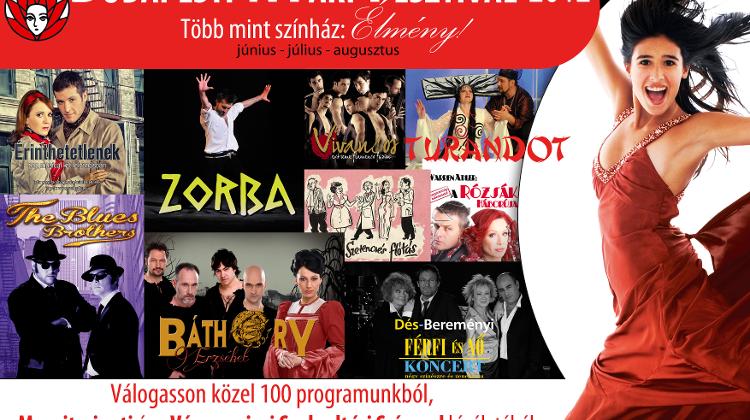 More than theatre: Experience it in from June till August on Margaret Island and Városmajor Open-Air Theatres and also at Margaret Island Water Tower. World Sensation, World premieres and premiers. This is the greatest festival of the Year 2012 in Budapest. The festival, including the greatest variety of programs during the summer, which offers all kind of programs to both domestic and foreign visitors in Budapest.

Further information about our shows and discounts. Online ticket purchase without any administration fee on  szabadter.hu

The Budapest Summer Festival is sponsored by the Municipality of Budapest.
Patron: István Tarlós, Mayor

World Sensation on the Margaret Island.

The extreme fl amenco fusion formation will debut in Hungary, and dazzle the audience of Margaret Island Open-air Stage with a heated show. The world famous seven Spanish musician and dancer brothers have already showed their fantastic talent in more than thirty countries in front of several thousands. The unique show called “Magical Seven” is a
real musical and flamenco dance show.

The Budapest Summer Festival joined the series of programs included in the Summer Night of Museums. The
“witches” of the Midsummer Night Fires and Loves are excellent artists representing several diff erent genres, who
present a spectacular energetic and unforgettable concert, using their special miracle on the longest night of the
year. This night is also the fulfi llment of longed loves. Concert show conceived in the miracle of Midsummer Night
legends and myths.

It’s a story of a nice Mafia family in the 1960’s America. The musical, which is built on the well-known songs of local
pop music is a new premier with a real Broadway feeling.

Legend or reality? Conceptual case or unrealised love? Murderer or victim? Erzsébet Báthory, the mother, the wife,
the lover. The musical, which was prepared like an opera, presents the strong, but sensitive woman, who is puzzled with
jealousy and thirst for power, with extraordinary melodies!

The world famous work of Mikis Theodorakis is presented on the Margaret Island as never before. The dramatic
dance show of the festival features 300 artists. The story became popular well deservedly after the fi lm, in which
Anthony Quinn starred. The show off ers an unforgettable experience, spectacle and ambiance.

Edmond Dantes is locked in the Castle of If, from where is no turning back, but Monte Cristo takes revenge. When will the time come, when his emotions will hinder full showdown? Love, intrigue, revenge, passion. The piece made from the novel written by Dumas, presenting the great songs of György Szomor can now be seen in the Margaret Island!

The world famous Blues Brothers songs were featured in fi lms and in theatre shows too. Margaret Island Open-air
Theatre presents the concert-show version fi rst time in Hungary! Pál Feke and Attila Serbán are not only the lead
characters of the new show, but also musical editors and directors of the production.

A great summer premiere at the Open-air Theatre is one of the most popular works of Puccini. Turandot is revived on the Margaret Island with a spectacular presentation. Perhaps the most beautiful and most popular opera tale tells the story of the unapproachable Princess Turandot, who becomes a sensitive and loving woman by the touch of love. The show features a large symphony orchestra and choir. Leading roles are played by the biggest Hungarian stars.

New Pier Opens at the Margaret Island: Open-air Theatre and Water Tower
If you already have your ticket, your date and the show, you can still top it all up with a cruise.
Taking our ships is the fastest way to get to and from Margaret Island.

The NEW PIER, where ships arrive to:
- Open-air Theatre and Water Tower

The departure time of the ships ent in every pier. Ships are starting to come back 20 minutes after the end of performance. Please check out the detailed schedule!

Further information and online ticket purchase: www.szabadter.hu and www.mahart.info
Ticket purchase pre-emption: at the ticket office of Vigadó Square, Batthyány Square and International Pier, as well as in the Open-air Ticket Office. Ticket purchase is also possible on ships.

Without administration fee at www.szabadter.hu, from May at the locations , the Margaret Island and the Varosmajor Open-air Theatres ticket office.
Visit our website to find out about our discounts!

Further information: www.szabadter.hu, jegyiroda@szabadter.hu, 00 36-1/301-0147
The theatre reserves the right to change the schedule of the shows!

Why is the 101-year old Margaret Island Water Tower so unique?

Because…
- it is the oldest and largest water tower of the country,
- it is a special tourism sight, from which we can see a 360° view of Budapest,
- it gives home to the first visual exhibition halls of the country,
- the buildings and sights of Budapest as well as the panorama of the Buda Hills provide a unique experience
In the water tower, there are four different permanent exhibitions in the form of a uniqueVisual Art screening.

For further information, visit our webpage,and our Facebook page, or take a look at the free Water Tower programme schedule.