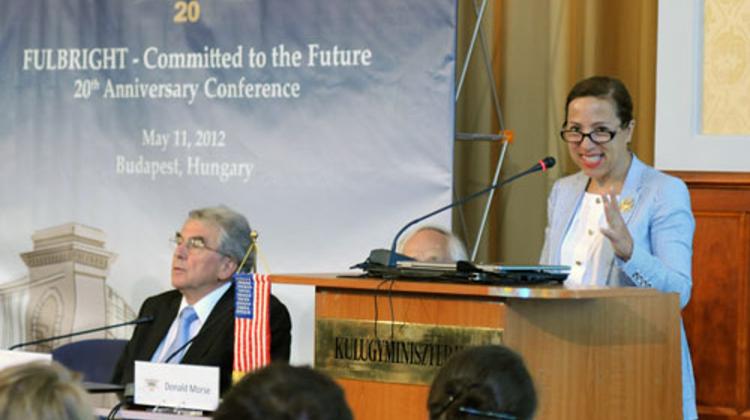 The Fulbright Commission in Hungary celebrated its twentieth anniversary on Friday, May 11th with a conference focused on its vision for the future. The “Fulbright: committed to the Future” event was attended by more than 200 Fulbright Alumni, government officials and private sector supporters of the Fulbright program. The many distinguished speakers included Ambassador Eleni Tsakopoulos Kounalakis, Minister of National Resources Miklós Réthelyi and U.S. Deputy Assistant Secretary of State Bay Fang.

In her remarks Ambassador Kounalakis noted that “the Fulbright program is instantly recognizable and synonymous with academic and professional excellence, dynamism and leadership.” Deputy Assistant Secretary Bay Fang remarked “Looking ahead 10 or 20 years, I think we can have confidence that people-to-people exchanges taking place now, that are taking increasing diversity into account, will keep firm the foundation of U.S. relations with Europe.”

Ambassador Géza Jeszenszky – former Minister of Foreign Affairs – highlighted that Fulbright played a significant role in changing the regime through the education of future leaders. Norbert Kis Deputy State Secretary for Higher Education said that Fulbright “witnessed and championed the changes in the past twenty years.”