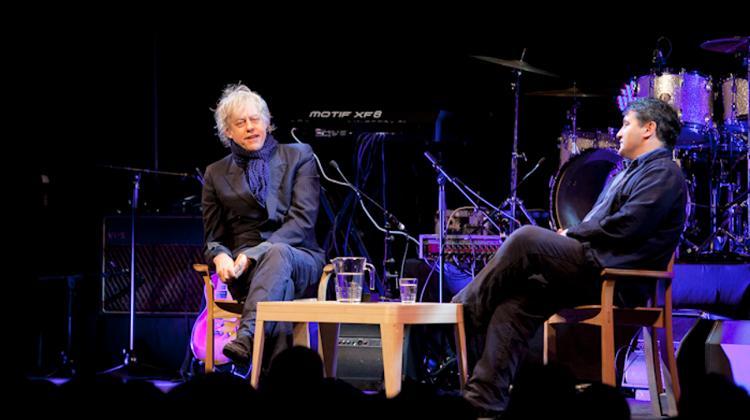 Tibor Fischer talks to Friedrich Judit, 10:00-10:45, PIM. The novelist discusses his work from Under The Frog and The Thought Gang to Good to be God and the two short stories Crushed Mexican Spiders. English with simultaneous translation into Hungarian.

Bob Geldof talks to Peter Florence, 11:00-11:45, PIM
A conversation with the singer and activist about Africa, music and love.
English with simultaneous translation into Hungarian

Angeles Caso talks to Ana Gavin, 12:00-12:45, PIM
The Spanish novelist (Contra el Viento), journalist and biographer of Empress Elisabeth talks about art and life, fiction and reality. With the collaboration of Instituto Cervantes and Fundacion Lara.

Shigeru Ban talks to Martha Thorne, 13:00-13:45, PIM
The Japanese architect (The Pompidou Centre’s Metz Museum, Japanese Pavilion at Hanover) discusses his work in sustainable materials and his disaster relief work with the Director of the Pritzker Prize. Introduced by Dave Venables ( AHEC ). Sponsored by AHEC and IE university. English with simultaneous translation into Hungarian.

Hanif Kureishi talks to Tiffany Murray, 14:00- 14:45, PIM
The playwright, novelist (The Buddha of Suburbia, Something to Tell You) and film-maker (The Mother, The Black Album, My Son the Fanatic, Venus) discusses his work with the author of Diamond Star Halo. English with simultaneous translation into Hungarian.

Dragomán György talks to Kollár Árpád, 17:00-17:45, PIM
The award-winning translator and novelist discusses his works A pusztítás könyve (The Book of Destruction) and A fehér király (The White King). Hungarian with simultaneous translation into English.

Rolf Strom-Olsen talks to Georg von Habsburg, chaired by Revel Guest, 18:00-18:45, CEU
A conversation about business, humanitarianism and world affairs with the distinguished statesmen and scholars.
Sponsored by IE university with the collaboration of CEU. In English.

Hay 25: Ben Okri, Jung Chang, Földényi F. László, Dragomán György, Tibor Fischer, Tiffany Murray talk to Jon Gower
19:00-20:00, PIM
The Hay Festival is 25 this year, and as part of the celebrations we have put 25 Questions to everyone taking part in all our 15 festivals around the world. Please join the panel to discuss three of the Questions – Why do we read books? We’re building a library of literature, music and cinema. Which one book, film and album would you contribute to it?

25 years ago, the whole world lived in fear of an Aids pandemic, the Berlin Wall divided East and Western Europe, China and Latin America were considered part of the developing world and less than 1% of the world’s population used mobile phones or computers. What changes will we see to the way we live now in 25 years’ time?
English with simultaneous translation into Hungarian

My Beautiful Laundrette – film screening, 20:30-23:00, CEU
A showing of the modern classic movie followed by Q&A with the screenwriter Hanif Kureishi, chaired by Peter Florence
In English.

Tickets:
Events taking place at CEU are free of charge. Tickets for discussions are available at the ticket office of the Petöfi Literary Museum Adults: HUF 400/discussion, Pensioners/students: HUF 250 / discussion.