A Weekend In Borsod County By Treehugger Dan 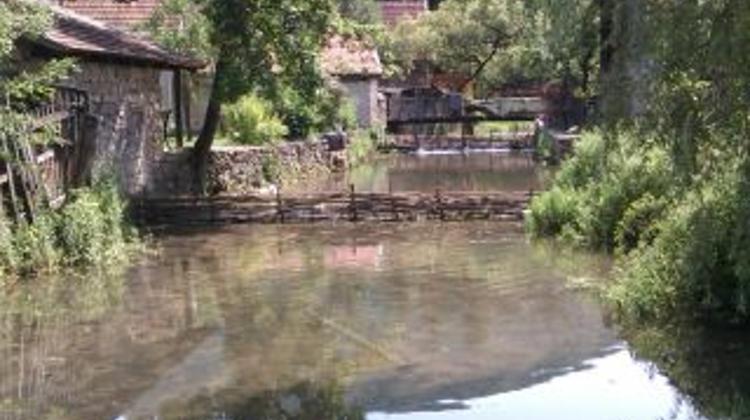 Chris, Nora and Gabi came down to the house this weekend. It was chill-out time for them, while I also had to try to deal with the large snake I almost stepped on three weeks ago in the stables. In the morning I whipped up a batch of my famous blueberry pancakes. A friendly expert from Aggtelek National Park came around noon and looked for signs, but did not find anything.

Hopefully it has found a new home, and moreover, I hope it is a garden snake and not a viper. It was a scorching hot day, so we went swimming at the lake. Like previous years about this time, the water near the shore was covered in green algae, but further out it was clean and cold.

Dezso the stonemason also came over and finished plastering and whitewashing the new buboskemence. It looks much better josvafonow. We arrived too late on Friday to grill, so we did both the grill and the bogracs on Saturday afternoon. Chris grilled ribs, steak, chicken, and several kinds of Wilkinson Sausages (including turkey sausages for me), while I did the chicken paprikas in the bogracs. Nora then made s'mores and grilled bananas with dark chocolate for desert.

Sunday morning Nora and I went for a swim while Chris made eggs, beans and bacon for breakfast. Later in the day we went to visit friends in Perkupa, bought some som-szilva (dogberry-plum) palinka (the best palinka I have ever had), tried the new vadkorte (wild pear) palinka, and toured the village. No one was in a rush to go home to Budapest, so we also strolled around neighboring Varboc and Josvafo (in my opinion, the two prettiest villages in Hungary) where we had ice-cream, beer and lemonade before heading back to Budapest and the European Cup football final.

They all want to return and take a tour of the cavern system in Aggtelek, the second largest karst cavern system in Europe. I would suggest entering at Josvafo and exiting at Voros to. The 2 hour tour is beautiful and plenty for a day program. Borsod County is the poorest in Hungary, but as usual in these situations, it is rich in natural wonders.

There are thermal baths, castles, cavern systems, storks, salamanders, cycling, hiking, horse riding, and even some 5-star dining, as well as many other activities for singles, couples or the the whole family. Only 2 hours away by train or car.

This is part of the Xploring Hungary series sponsored by FoxAutorent, 'The Leading Independent Car Rental Company In Hungary'. Save 5% on car rental by using the Fox Autorent booking engine on XpatLoop.com