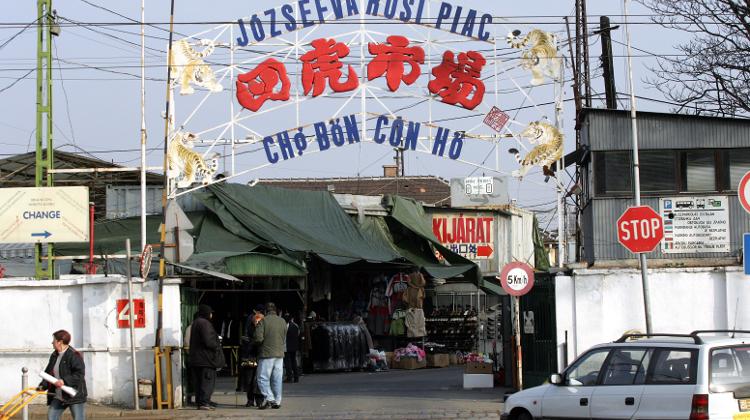 2014 Update: It was closed down. Hungary is not the most multicultural nation on the planet. 95% Magyar, 2% Roma, and the rest of us. Around 100,000 Chinese live in Hungary, and Budapest has its own Chinatown, well, a sprawling China-shanty-town. It's a real oddity, and if not the most immediate of local attractions, it is a side of the city that's bafflingly interesting, in a grimy kind of way. The authorities are threatening imminent closure, and if they do shut it down I hope provision is made for those of us who want decent Asian food and cheap perfume in the same place.

Downtown Blaha Lujza tér is not the prettiest part of Budapest but if you walk in four out of five directions, you're still in town: cosmopolitan enough to find tourists looking at upside-down maps. The fifth direction, however, along Népszinház utca, is as well-known as the fifth dimension, and you can take a tram straight into it, and to Józsefvárosi piac aka the Chinese Market.

You know when you're at the market because the tram takes a sharp left in front of an enormous brick spacecraft-of-a-building, before stopping a hundred metres later, next to some disused railway sidings. The latter announce your arrival, big Chinese characters meaning 'Four Tigers Market' are shown between the rail track, road and dilapidated warehouses and factories. It's at this point that you're wondering what the Hell you're doing at Józsefvárosi piac.

The market has handled rumours about closure for years, the threat is more real than ever now, but daily market life still goes on at a pace. What's on sale? Just about everything, on the cheap. Counterfeit brands, fake perfumes, genuine radio alarm clocks from the 1980s... I'm told it's the only place you can buy Vichy skincare products without going to a chemist. I've also heard that you can buy guns, although that's not exactly advertised. Personally, I think the atmosphere is actually the best value, although socks come a close second.

The market also serves as a gambling den: poker games go on in full view, particularly during the week, when business is slower. Little piles of notes are not so much as hidden, although furtive glances are de rigeur. Photos are restricted to what you can capture discreetly, unless you want to be yelled at or lynched.

The volume of legal (and illegal) business being done here difficult to estimate but for sure big money is involved. At weekends it's nearly impossible to find a parking space as the market is not only filled with Hungarians hunting for fake branded goods, but also with visitors from neighbouring countries, and expats too.

It's also hard to guess exactly how many Asian people work at the Józsefvárosi piac, or what they will do if the place is closed down, but it's no surprise that the food here is a big improvement on the city's Chinese Bufés.

Foodies looking for a taste thrill should go right to the back of the market where a simple stall sell some of the most authentic Vietnamese fare in Budapest. Get it while you can!

Getting there: Four trams run along Népszinház utca from Blaha, but only two, the #28 and #62 take you to the Chinese market in Budapest (click to see a map). .

By Andy Sz. - his opinion doesn't necessarily represent the views of this portal, your opinion is welcome too via info@xpatloop.com

Photos of the Chinese Market in Budapest courtesy of Northfoto.com