Xpat Report: The Prime Minister Of Macedonia At EuCham In Budapest 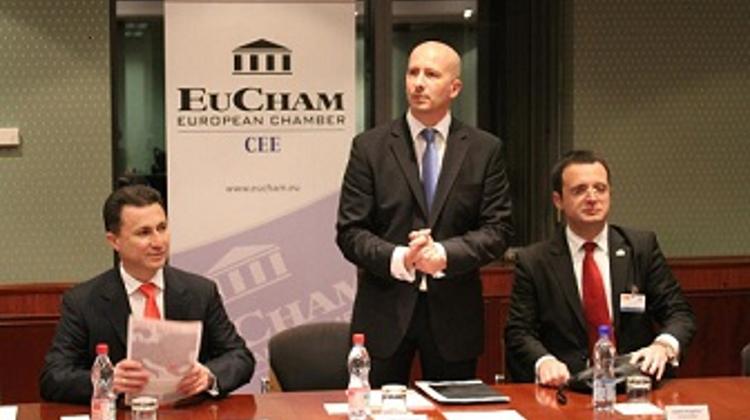 The Prime Minister of Macedonia Mr Nikola Gruevski met the CEE business community of EuCham - European Chamber in Budapest on 13 Nov 2012 at the Bank Center. The President of EuCham Mr Michele Orzan opened the Investment Forum with the announcements of the recent projects, then stressed Macedonia’s growth and achievements, in front of 60 carefully selected participants.

Mr Orzan highlighted that the World Bank ranks Macedonia as #2 in Eastern Europe and Central Asia on ease of doing business, and that its flat tax rate is 10%, one of the lowest in Europe.

Mr Nikola Gruevski, Prime Minister of Macedonia since 2006, presented the macroeconomic frame and emphasized the flat tax and the ease of tax payment. With his interesting speech spanning over various economic topics, the PM impressed the participants with his deep knowledge of different business issues and economic data.

Overall, the whole government team, presented by the Ambassador Mr Darko Angelov, gave the audience the impression of being very well prepared and knowledgeable about business and economic topics, and business-friendly in its attitude.

The successful Q&A part was followed by a networking session attended by leading business players in CEE, including Citibank, BNP Paribas, Magyar Telekom and Makedonski Telekom, Port of Koper and many others.