The Government Signs A Strategic Partnership Agreement With Microsoft Hungary 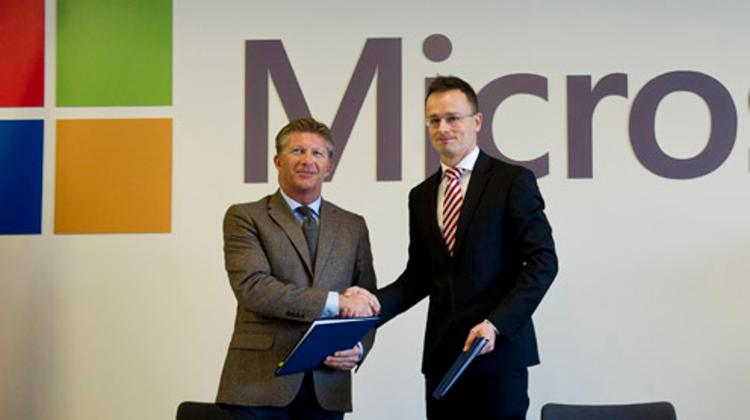 The Hungarian Government concluded a Strategic Partnership Agreement with Microsoft Hungary Ltd. today in Budapest. At the signing ceremony, State Secretary for foreign affairs and external economic relations Péter Szijjártó said that a strong info-communications and technology sector is a key component of Hungary's competitiveness and that the Government is giving special attention to supporting innovation and R&D, as well as to cooperating with large corporations.

The State Secretary announced that the Government would cooperate with Microsoft in launching a national digital public education website and a digital home project, adding that related talks are at an advanced stage.

He also stated that, in times of crisis, the Government should encourage honest hard work; this is why tax policy has shifted its focus from employment to consumption. In addition, a “competition” for seeking partnerships has started in which the Government should also be involved. This is why it has concluded strategic agreements with companies that represent significant added value within the Hungarian economy and which use Hungarian suppliers. He recalled that a total of 40 such agreements will be signed, of which the eighth was concluded with Microsoft.

The State Secretary stressed that Microsoft pays more than HUF 500 million in corporate tax, contributions paid after its employees reach some HUF 1 billion annually, and its wage costs exceed HUF 3 billion. He added that the firm has three thousand partners out of which 60 percent are Hungarian.

István Papp, Chief Executive Officer of Microsoft Hungary, said the company was present in the Hungarian market as an innovator, investor and employer, as well as a major participant in Hungary's economy. He said Microsoft has strategic and not tactical objectives in Hungary. He emphasized that Microsoft works with Hungarian employees and according to Hungarian initiatives, adding that the company is committed to supporting Hungarian education and regards the development of digital literacy and digital business culture as important. Furthermore, he called it encouraging that the Hungarian Government regards large companies that wish to thrive in an equitable manner as allies.