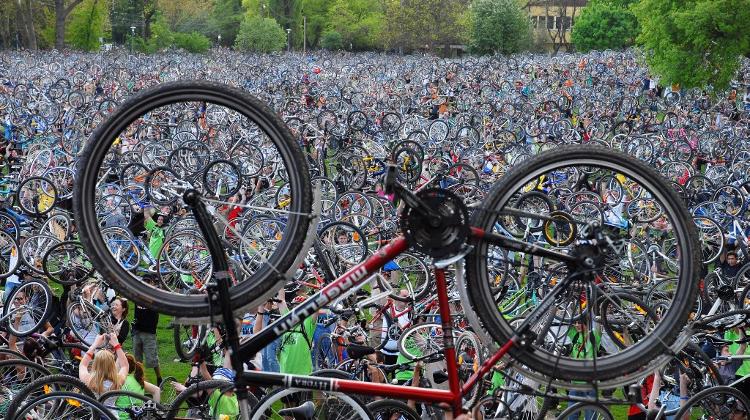 Budapest’s Critical Mass, one of the biggest cycling demonstrations in the world, went out with a bang on April 22 with an estimated 100,000 people taking part in the annual Earth Day extravaganza.

Organisers, who announced a year ago that 2013’s event would be the last hurrah, had urged local cyclists to make the final ride the biggest ever. This was no small ambition as the standing record, set in spring of 2008, was an incredible 60,000-80,000, and attendance since then had fallen off by half. Weather looked to be a challenge as well, with forecasts on Friday indicating rain.

However, at the starting time on Saturday afternoon, the sun was shining and an enormous queue of cyclists had formed on the cordoned off riverside road just north of the Hungarian Parliament. The procession started rolling at 3:55 p.m. and by the time the tail end passed “go” more than an hour later, the leaders of the pack were already at the Oktogon intersection, 13 km downstream.

As always, it was impossible to tell how many cyclists there were but a credible estimate came from organiser Gabor Kurti, co-owner of the local bike courier service Hajtas Pajtas. He reckoned it was 100,000, while admitting in a post on the Critical Mass website: “We have no idea. But we said it was apparent that there were more than 80,000.” In fact, anyone who’d been there in 2008 could see that the crowd at the final bike lift in Budapest’s City Park took up a significantly greater area than ever before.

If, indeed, it was the last Budapest Critical Mass, it was a fitting end to what some believe is the most successful grassroots movement since the environmental protests that led to the fall of the one-party state in 1989.

Budapest’s first Critical Mass was the brainstorm of cycling activists in the Autumn of 2004. It was a direct protest against then Mayor Gabor Demszky, who refused to endorse European Car Free Day celebrations on a weekday on the grounds that it would interfere with motor traffic.

The cycling activists went ahead and held an unsanctioned ride during a weekday rush hour. The astonishing turnout of 4,000 kicked off a tradition of similar rides held twice per year, once in the Autumn on Car-Free Day and once in the Spring on Earth Day.

As the rides got bigger and bigger, more and more people began to use bikes for local travel in Budapest. No one knows what the cycling modal share in Budapest is, but on a major downtown thoroughfare where bike traffic is monitored, cycling levels have been growing steadily, doubling from 2011 to 2012.

There have also been slow but sure improvements to the cycling network and City Hall, including in the last four years some carriageway bike lanes that have displaced car parking.

Critical Mass organisers say the growth of everyday cycling levels has made the Critical Mass obsolete. They say they want to refocus their energies on “serious” lobbying with concrete aims – and have urged CM followers to join a local cycling NGO. At Saturday’s event, many in the crowd expressed doubt that Critical Mass was really coming to an end.

However in a post following Saturday’s ride, Kurti sounded firm about his intentions. He even stated that the coveted souvenir t-shirts for Critical Mass 2013 would only be given to the first 400 people to join the cycling club.