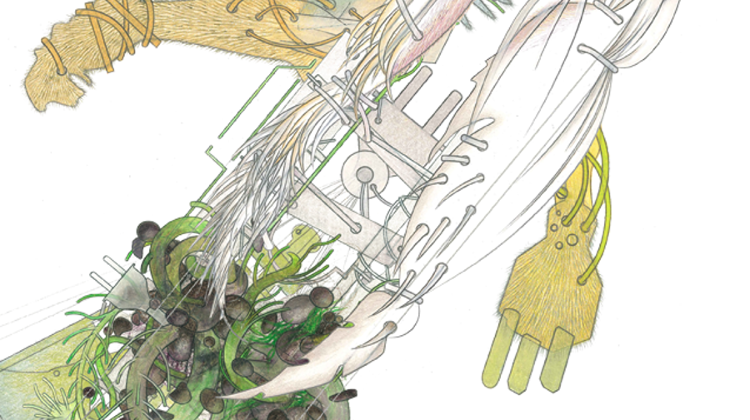 "Castling - Hradovanie - Váralás", the show will open at 7pm on 18 May 2013 in the Fiľakovo Castle Museum (Füleki Vármúzeum) in Central Slovakia. As you may know, Fülek is a historical town in Slovakia with a Hungarian majority population about 20km from the Hungarian border, situated in the historical County of Nógrád. It is about a 2-hour drive from Budapest.

At 7pm on 18 May 2013, Canadian artist Tammy Lu will open her latest art exhibition in the Fiľakovo Castle Museum in Slovakia. The opening is part of this year’s Night of Museums programme, a Europe-wide event organised under the aegis of the European Council and UNESCO.

Under the title “Castling – Hradovanie – Váralás,” Lu presents a multimedia art exhibition comprised of drawings, textiles and digital animation. By exploring the symbolism of castles, Lu constructs an idiosyncratic visual language for interpreting the themes of migration, cultural diversity and identity.

While these are universal themes, Lu approaches them from the perspective of her personal experience and in the context of historical ties between Canada and Central Europe.

The child of immigrants from Taiwan and the Philippines, Lu grew up in a mixed family in the multi-cultural environment of Saskatoon, Saskatchewan, Canada. Since 1885, the province of Saskatchewan has also seen much immigration from Central Europe, including Slovakia and Hungary.

In the Fiľakovo show, Lu uses elements of Saskatoon’s urban landscape to construct images, patterns, and text. Her technique involves complex translations, transformations and distortions – like the immigrant experience itself.

As part two of this project, Lu intends to construct art work from the urban imagery of Fiľakovo, to be exhibited in Canada at a later date, which would complete the construction of a metaphorical “castle bridge” between the two communities.

The ”Castling – Hradovanie – Váralás” exhibition can be visited on the 5th floor of the Bebek Tower of the Fiľakovo Castle Museum between 10:00-18:00 Monday through Sunday from 18 May to 13 September 2013.

This project is supported by the Saskatchewan Arts Board, the Town of Fiľakovo, Fiľakovo Castle Museum, Escape Studios, London (UK), and Pro-Touch Engraving.

Tammy Lu has lived and worked in Canada, the USA, Taiwan, Spain, Hungary and England. She has worked with painting, sculpture, and fashion design, and more recently with drawing and illustration. She is the cover illustrator for the New Metaphysics book series at Open Humanities Press.

Lu’s previous show (with Crystal Bueckert) opened in the Mendel Art Gallery in Saskatoon in March 2012. She was the featured artist in the Winter 2012 edition of the Canadian Grain literary journal. Her most recent publication is the limited edition artist’s book, Transforium (with Mari-Lou Rowley), published by JackPine Press in November 2012