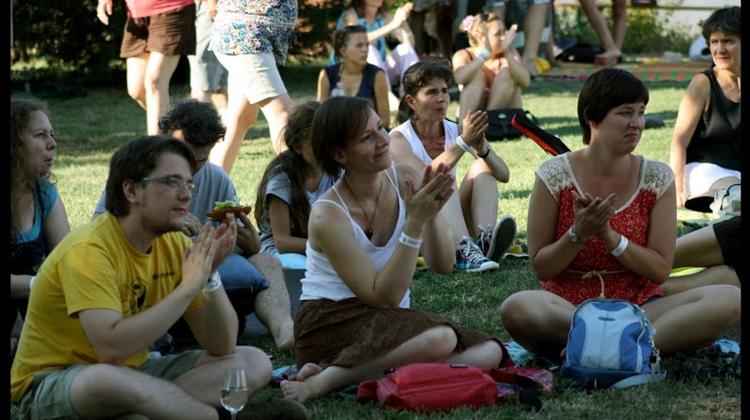 The pan-art Festival labelled as ‘excellent‘ by the Hungarian Festival Association and awarded second place in the Hungarian festivals' gradiation in 2010, befalls at almost 20 locations in 5 villages through the course of 5 days, every year in August. Several of the musical, theatrical, literary and fine art programs require an intimate, inward setting for a small audience, while some of them are real open-air festival-concerts with thousands present.

Location:  Nagyharsány and the Statue Park

Nagyharsány
A small village, at the hillside of Szársomlyó, populated by 1730 people, in the southern slope of the Villány mountains. There are many classicist farmhouses from the previous century, and the old cellars are also outstanding. Its gothic styled, Calvinist temple is one of the locations of the European Winesong festival.

Open Air Statue Park – between Villány and Nagyharsány
The open-air museum and statue park was established in an abandoned stone quarry on Szársomlyó Hill in 1968. Statues by Hungarian and foreign sculptors worked in the nearby artists' camp can be seen in the park.
The studio of the sculptor colony was opened in the Gyimóthy Villa close to the quarry exhibition space. The monumental artworks seen in the park came into existence during international symposiums. The institute regularly organises courses, and started an art educational programme together with the Faculty of Arts of the University of Pécs.

Kisharsány and the Vylyan terrace

Kisharsány
It lies at the feet of the Siklós-Villány mountains, a home for 562 persons. The settlement is a part of the “Wineroad” formed in the wine region. In the nearby area there is mostly grape growing and wine production. Its Calvinist church is a national monument.

Vylyan Wineyards and Winery
The winery lying in beautiful surroundings isn’t famous only because of its fine wines – they tend to grab every opportunity to combine arts with wines, no matter what form of art it is. They help happily – as in the case of the Devils Cauldron Festival – the fresh, open, talented proposals. For further information, videos, extras, visit the homepage of Mediawave:

Palkonya, a village of 370 inhabitants in Southern-Baranya has maintained the architectural heritage of the German vintners settled to this region in the 18th century. The most notable architectural landmark of the village is the row of wine cellars consisting of 53 press houses on the hill at the end of the village. These press houses have been built gradually over the golden age of winemaking and grape growing at the beginning of the 19th century. Their whitewashed facades are still a gripping site today. More and more tourists of the Siklós-Villány Wine Route enjoy visiting these cellars full of blazing red wines and vintners’ hospitality.

The village’s children and those traveling through have great fun in Palkonya’s wooden playground, an outstanding work of art by folk woodcarvers. Those who are here for fishing or hiking will find refreshment in the quite surroundings and the rich bird varieties of the nearby fishery lakes.

The most frequented event in Palkonya is the “Open Cellars of Pentecost", put together yearly on Pentecost Sunday by the villagers and the Village Council. On these occasions Palkonya welcomes guests for various cultural events, children’s’ activities, horse drawn carriages, and naturelly, wine tasting.

Continuous wine-tasting in the cellars during the festival.