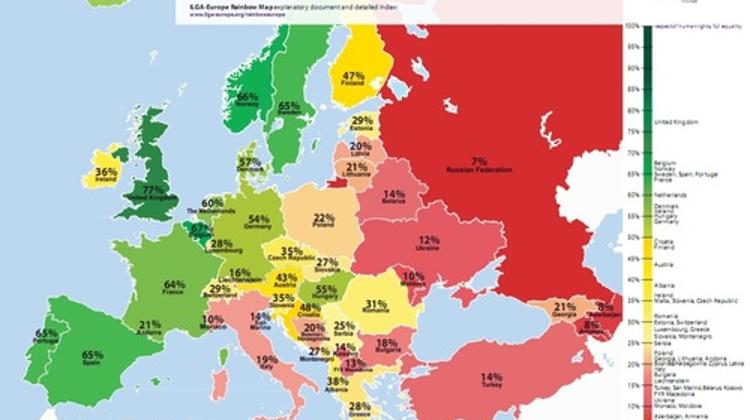 By Ferenc Kumin: Earlier this month, July 6, the capital was the site of the 18th annual, and biggest ever, Budapest Pride Parade. The event, which started off as an equal rights demonstration for lesbian, gay, bisexual, transgender and other sexual minorities, has gradually broadened into a week-long festival of events.

As I mentioned, the Pride parade saw a record number of participants this year – nearly 10,000, according to organizers. One incident, where three of the festival participants were assaulted by counter-demonstrators while walking home after the parade, tarnished what was otherwise an entirely peaceful, orderly day. Law enforcement is pursuing the alleged perpetrators.

One suspect is already in custody and will be brought to justice. In Hungary, the dignity and rights of all people are protected in the new constitution, the Fundamental Law. But where does Hungary stand on the question of the rights of sexual minorities?

Earlier this year, ILGA, an organization advocating sexual minority rights, published a map of European countries, denoting degrees of respect for the human rights of sexual minorities. As you can see below, according to ILGA, Hungary stands clearly among the countries where rights are better respected and discrimination is lower – those countries colored green – and really sticks out when compared with other countries in the region.

In Hungary, like in many European countries, the issue of same-sex unions is regulated in the Civil Code. The law recognizes the right of every adult to engage in a relationship with another adult under the legal category of civil union or civil partnership. This is every bit the same level of legal protection we find in other EU countries. And as ILGA has found, Hungary’s respect for rights and freedom from discrimination of sexual minorities, is on par with western Europe, and compared to some cases even better.

As I’ve written before, despite the criticisms, the Fundamental Law in fact protects each individual’s basic rights and defends the dignity of every member of a religious, ethnic, sexual or other minority against discrimination. In this spirit, this nation will continue to see diversity as a virtue.