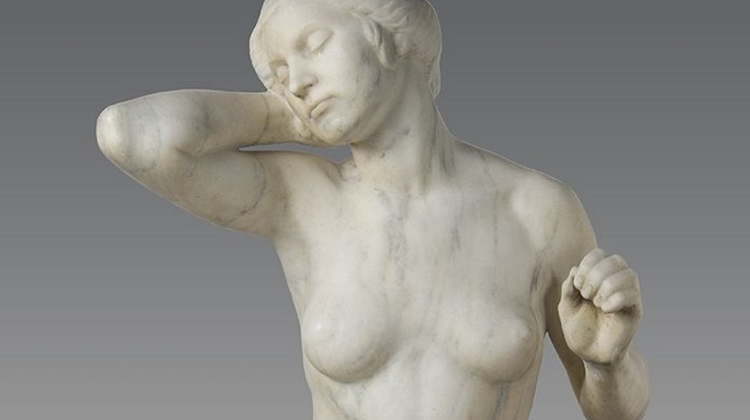 The collection preserves the most prized works of 19th- and 20th-century Hungarian sculpture along with coins, medals and plaques by Hungarian masters from the 19th to 21st centuries.

In addition, it contains wax and plaster copies replacing original artworks, as well as coin works made by contemporary artists. The holdings comprise some ten thousand items. The most outstanding works are displayed at this permanent exhibition.

The collection, which contains 4,600 works, includes the most significant 19th and 20th century statues of Hungarian art history. The most outstanding are in the Gallery’s permanent exhibition.

The portraits by István Ferenczy, the master of the first half of the 19th century, are defining works. These depict his contemporaries such as Ferenc Kölcsey, a major poet of the era, and include Self-portrait (circa 1830). Young Shepherdess (Beginning of the Fine Arts) (1820–1822) is a programmatic work with which Ferenczy wanted to lay the foundations of Hungarian sculpture.

Meanwhile, classicism gained ground in Hungary’s public taste; fused with other conceptual and aesthetic influences, it lived on and flourished beyond the middle of the century with small masters working on the boundary of craftsmanship (e.g. Lőrinc Dunaiszky, Ferenc Kugler and Rudolf Czélkuti Züllich) and in those by the masters of neo-classical academic art (József Engel and Miklós Vay).

In the 1840s Hungarian sculpture was linked to national romanticism via the œuvre of Károly Alexy, who studied in Vienna.

From the 1870s portrait sculpture satisfying the need to impress played a significant role. The busts by Alajos Strobl modelled with fine realism (Luischen, 1884; Our Mother, 1894) and those by György Zala sculpted with splendid elegance represent the most emphatic works of the genre.

Commemorative sculpture had its golden age in that era. The most beautiful works in the collection are represented by statues of János Fadrusz (Equestrian Statue of King Matthias, 1902), Barnabás Holló, Adolf Huszár and József Róna (Equestrian Statue of Prince Eugene of Savoy, circa 1900), Miklós Ligeti (Anonymus, 1903) and György Zala (Statue of a Soldier, 1890).

Among the masterpieces of the Hungarian sculpture collection, the statue gallery as a thematic unit of the permanent exhibition includes some characteristic portrayals of nudes selected from the white marble statues made from the end of the 19th century to the 1920s.

The Department of Medals

The Department of Medals is home to 19th–21st century medals and plaquettes by Hungarian artists, wax and plaster models, as well as contemporary artists’ objects defined as medals – in total 4,826 works.

The core of the collection is represented by medals made in the first half of the 20th century (3,243 works).

The 19th-century collection comprises a smaller number (326) and is less significant from the aspect of medallic art, regarded as an independent genre, since commemorative medals made in the first half of the century are in every respect reminiscent of struck coins.

Artists broke away from this tradition in the 1870s in France by rendering pictorial compositions with full perspectives on the medal surface instead of motifs represented in isolation and in a sculptural manner.

The pantograph, which came into general use at the time, also helped with the elaboration of those. Of Hungarian artists, Ferenc Szárnovszky and Fülöp Beck Ö., who was starting his career, were the first to create medals with the new approach in the last decade of the 19th century.

The latest tendencies reached Hungary later, via France, Germany and partly Austria. Due to this, styles of different origin were present in Hungary before World War I (István Schwartz, Antal Szirmay, Ede Telcs, Lajos Berán, Gyula Juhász, Gyula Murányi and Ödön Moiret). It is worth highlighting the names of Vilmos Fémes Beck, Fülöp Beck Ö. and József Reményi, with whom the most progressive endeavours of the time were connected.

Medallic art in Hungary witnessed a revival in the 1930s and 1940s, due to the appearance of a new generation who mostly had spent time in Rome – Ferenc Csúcs, Sándor Boldogfai Farkas, József Ispánki and Walter Madarassy. They generally regarded Fülöp Beck Ö. as their “master”.

The post-1945 section of the collection currently comprises 1,257 works. The most important connection between the pre- and post-World War II periods is represented by Béni Ferenczy’s art.

His classicizing period between 1930 and 1956 still stands as a pinnacle of traditional Hungarian medallic art. Yet his early cubistic phase in the 1920s also provided a model for the slowly emerging modern endeavours in the 1960s (Tamás Vígh, Antal Czinder).

Miklós Borsos signified another starting point. His engraved technique was followed by many artists. However, his medals created from the imprints of objects moulded in the modelling material (a material collage, so to say) had a truly great influence (Erika Ligeti).

The emergence of a neo-avant-garde also left its mark on Hungarian medals, primarily with the new-geometric endeavours (Tibor Csiky, Mária Lugossy), yet conceptualism, although delayed, also emerged (László Szlávics Jr.). These works, that can be mostly called medallic art objects, significantly extended the concept of the genre.

The trends in contemporary medallic art are impossible to characterise briefly. However, from a technical aspect perhaps the so-called lost-wax casting, which was rediscovered at the beginning of the 1980s, was most important and is still significant in creating works today.