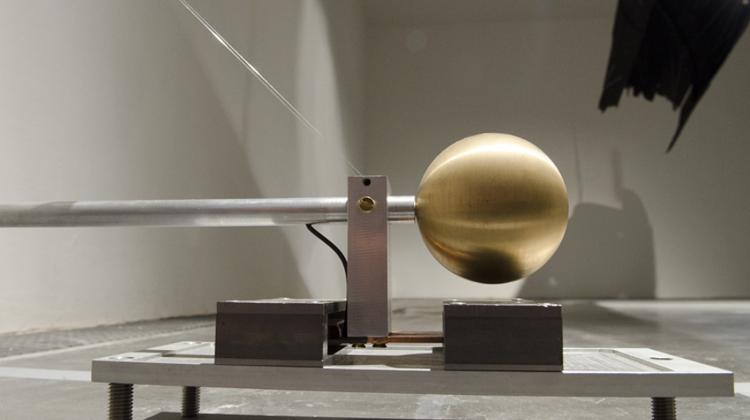 Kerstin Ergenzinger (b. 1975) works as an artist using variable media. Her work questions our relationship to reality. They remind us that processes by which we assess and evaluate our environment are subjective, unstable and characterized by perpetual change. In her reactive installation, the Berlin based artist generates vibrations and renders their random, almost imperceptibly subtle, motion visible and audible through the undulations and sounds of a shape that appears natural, but is, in fact, purely artificial.

Her unusual use of materials, which comprises an important part of her artistic approach, is perplexing even to experienced contemporary art viewers: the elements employed in Red Noise, for instance, have more to do with natural and medical science, than with exhibition spaces. The suspended, kinetic object, which resembles a gigantic dry leaf, is brought into motion by a seismometer and nitinol wire. The resulting movement is also influenced by the footsteps of visitors entering the exhibition hall.

A seismometer is an instrument that turns the motion of the ground into some other, more measureable physical phenomena (e. g. electric potential). These, in turn, stimulate the nitinol wire, which is also referred to as a shape memory alloy, as it is it is an extremely elastic alloy composed of nickel and titanium. Since the nitinol wire regains its original form after the physical impact that causes it to stretch, it can also be used as artificial ligament or muscle.

In physics, noise generated by predetermined but unpredictable processes is brought into correspondence with colours. Red noise or Brownian noise is generated by random movement and most closely resembles the sounds of a soft waterfall or distant showers. The stochastic movement of particles floating in gases or fluids, as well as the red noise produced by their collisions, were described by Robert Brown (thus supporting the theory of atomic structure).

The installation Red Noise, made in 2012, has only been on view till this occasion in Germany: in Oldenburg at the Edith-Russ-Haus and in the Dortmund subway as an exhibition of the Hartware Medienkunstverein. Contemporary art – and especially media art – enthusiasts have had the opportunity to view Kerstin Ergenzinger’s other installations, however, all over Europe. In 2011, she exhibited one her works in Hungary, at the A22 Gallery exhibition on German kinetic and light art. The artist received her degree from the University of Arts (UDK) Berlin and then pursued her postgraduate studies at the Academy of Media Arts Cologne (KHM). The third iteration of Red Noise being exhibited is curated by Lívia Rózsás.

Rotes Rauschen will be on view in the new project space of the Kunsthalle Budapest, which is situated in the assembly hall of the building. The ornate neo-cinquecento style of the spacious art hall, which was erected in 1896 for the millennium celebrations, is also visible in its interior, which, with its high ceilings, also possesses the characteristics of a white cube space. For these reasons, the M0 project space is the perfect location for a large-scale installation, which will meet its audience in one of the most renowned exhibition spaces in the country.

An Onopordum Performance solo dance will open the exhibition. To be precise, the dancer, Bernadett Jobbágy will dance with the kinetic and reactive sculpture a duet based on improvised movements.