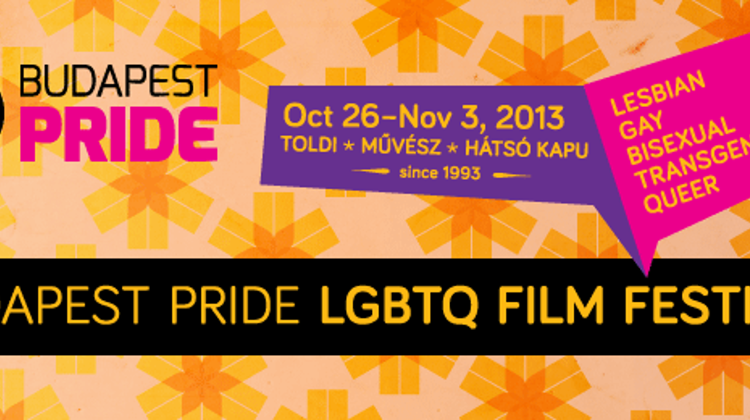 Debuting this year as a standalone festival, the Budapest Pride LGBTQ Film Festival will be held October 26 through November 3. For years, the film festival had been an integral part of the Budapest Pride Cultural and Film Festival and has now split off into a separate event series. The expanded festival will feature film showings in not just Budapest but also Pécs and Szeged, and the majority of the titles in this year’s lesbian, gay, bisexual, transgender, and queer (LGBTQ) festival are award-winning films that will be shown for the first — and possibly only — time in Hungary.

This year marks the coming of age of the 18th annual film festival, which was first held in 1993 as the Hungarian Gay and Lesbian Film Festival, organized by the Balázs Béla Film Studio. In commemoration of that first film festival, the main venue this year will be the very same as the one chosen 20 years ago: the Toldi Art Cinema. Director of the 1993 film festival, Adele Eisenstein, will give the keynote speech before the opening film of this year’s festival.

The Canadian 2012 drama Laurence Anyways (winner of the Cannes Film Festival Queer Palm in 2012 and the Best Canadian Film award at the Toronto International Film Festival) has been chosen as the 2013 opening film. In the film, Laurence, a teacher, tells his girlfriend that he wants to be a woman. In spite of the odds and in spite of each other, the couple confronts the prejudices of their friends, ignores the council of their families, and braves the phobias of society. For ten years, they try to live through this transition, embarking on an epic journey which, unbeknownst to them, may cost the couple their love.

For the first time, the film festival will feature screenings in Pécs and Szeged as well as Budapest. The opening film will be shown at the same time in all three cities. Events in Budapest will be held in three different venues: the Toldi Art Cinema, the Művész Art Cinema, and Hátsó Kapu. This year’s program includes 22 contemporary films, three retrospective films, and 17 alternative and short films. The majority of these titles have not yet been shown in Hungary.

The selection includes the 2012 documentary How to Survive a Plague (USA), which was nominated for best documentary at the Oscars. The film shows how New York AIDS activists used direct action to agitate for AIDS treatment, guiding the way to the discovery of effective AIDS drugs that stopped an HIV diagnosis from being an automatic death sentence. The 2013 Polish film Floating Skyscrapers (Płynące wieżowce), which received the East of the West award at the international Karlovy Vary Film Festival, will also be featured. Other highlights include Free Fall (Freier Fall). Nominated for the Teddy award at this year’s Berlinale Festival, this 2013 German feature film depicts a growing romance between two police officers.

Select showings will be followed by roundtable discussions. Following the Polish 2012 film In the Name of (W imie…), which reveals the struggles of a gay priest, a panel will discuss the acceptance of LGBTQ people within religion. Facing Mirrors (Aynehaye Rooberoo, 2012, Iran), the first Iranian featuring a transgender main character, will be followed by a discussion of trans rights, cultural norms, and laws in Hungary and Iran.

The 2012 Filipino film Bwakaw is about a man who comes out at age 70, and it examines whether love and relationships are possible at that age. The discussion accompanying the film looks at the situation of LGBTQ seniors and addresses fears of aging. After the 2011 film Vito, the roundtable discussion will consider LGBTQ representation in films today, what archetypes can be identified, and how representation has changed since 1895. Following the documentary How to Survive a Plague, the panel will discuss a recent controversial article by the Hungarian Civil Liberties Union on how LGBTQ activists in Hungary address — and fail to address — the subject of HIV/AIDS.

Alongside the cinematic events, the festival will also offer three parties. DJ Nyeste, a frequent DJ at the Budapest Pride Rainbow Party, will provide music for the opening party on October 26. The second party will be held on November 1 at the Toldi Art Cinema, with music from the DJs of the !szkafander party series. Gödör Klub will host the closing party, where music will be provided by the DJs of Brutkó Diszkó, as well as by Budapest Pride’s own DJs.

For news and details about the Budapest Pride LGBTQ Film Festival: 2013.budapestpride.com/ff