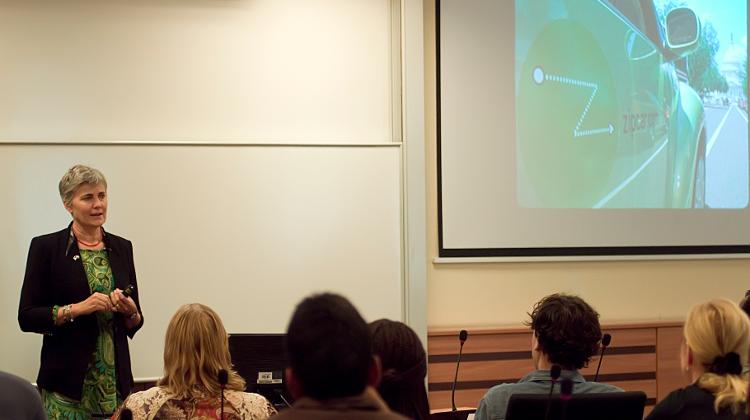 The ink had not yet dried on the Series A funding that would propel Zipcar to become the world’s largest carsharing company when one of its founders, Robin Chase, decided to send her customers an email that would keep her up most of the night.

At a guest lecture at CEU Business School in Budapest, Hungary on September 27, Chase explained how her message notified Zipcar’s 400 members that the daily rates they had been promised when they signed up for a service that made “renting a car as easy as using an ATM” would increase by 25 percent.

Her email was honest. She told customers she made a mistake. She miscalculated how much Zipcar would need to charge to be profitable.

On the morning after sending the message, she came into Zipcar’s brand new offices and one of her colleagues announced the “18 to 2” verdict. Eighteen customers replied with variations on “We support you!” and “There’s nothing else like Zipcar. We love it!” Two replied angrily, saying things like “No way! That’s not what I agreed to.”

One of the lessons of the story, Chase said, is the difference between small companies and big companies. “In a small company you see mistakes in real time. In big companies, it takes a long time to find out you’re doing something wrong.”

She encouraged the audience of CEU Business School MBA students to run companies as “learning companies” that swiftly recognize and rectify problems.

Chase shared several anecdotes about taking Zipcar from one lime green Volkswagen Beetle with the words “Wheels When You Want Them” on its rear bumper to a service that transformed the car rental industry during her lecture. The previous day, she delivered the keynote speech at the Second Entrepreneurship Summit, organized by CEU Business School, the American Chamber of Commerce in Hungary, the U.S. embassy, Budapest Business School and the Hungarian Private Equity and Venture Capital Association.

Chase has been recognized with many awards in the areas of innovation, design and environment, including Time 100 Most Influential People, Fast Company Fast 50 Innovators and BusinessWeek Top 10 Designers.

Chase went on from Zipcar to found several more companies, including Buzzcar, a company that helps car owners rent their cars by the hour or by the day.

Buzzcar is an example of what Chase calls the “Peer Incorporated” economy. Others are Facebook, YouTube, and Airbnb, the website where people rent other people’s apartments or rent out their own.

In such companies, there’s an excess capacity (e.g. apartments), a platform for participation (e.g. Airbnb.com) and peer collaborators (e.g. individual hosts and renters).

Chase said that the pendulum is swinging from the pre-industrialized era when everyone was an entrepreneur, but quality was inconsistent, to the industrialized age when companies standardized products and services, to the Peer Inc. economy, in which we will have “the best of both worlds.”

About CEU Business School
CEU Business School educates leaders and entrepreneurs who transform the organizations they work with, or in, into innovative, responsible entities that bring value to the world. CEU Business School was founded in 1988 in Budapest, Hungary by a group of visionary leaders headed by legendary investor and philanthropist George Soros. It was the first educational institution to offer American MBA degrees in Central-Eastern Europe. It is now the region’s leading business school, and part of Central European University.