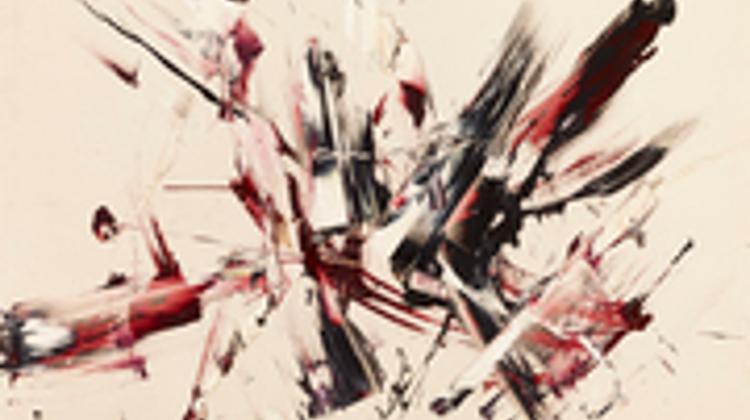 Painter Judit Reigl was born in 1923 in Kapuvár, and has been living and working in France since 1950. She is one of the rare artists of Hungarian origins who is recognised in the United States, and whose oeuvre uniquely combines the traditions of European and American abstraction.

Her paintings figure in the largest and most important public contemporary art collections: the Museum of Modern Art (MoMA) and the Metropolitan Museum in New York, the Tate Modern in London, and the Centre Pompidou in Paris.

The Hungarian public has already had the chance to get acquainted with her works at the life-work exhibitions that had been organised at the Műcsarnok/Kunsthalle Budapest (2005) and at Modem in Debrecen (2010), where they could get a comprehensive view of Judit Reigl’s oeuvre, from her early Surrealist compositions, through her gestural abstract works, up to her paintings depicting the human body that recur in cycles to a figurative approach.

Visitors might have been captivated above all by Judit Reigl ‘s story, that after multiple unsuccessful attempts, she finally crossed the Iron Curtain in 1950, and following a several months journey, arrived in France. In 1954, her artist colleague Simon Hantaï, also living in Paris, introduced her to André Breton, the father of Surrealism, who then invited her to participate at an exhibition at L’Étoile scellée, the gallery of the Surrealists. At first, Judit Reigl declined the invitation, yet accepted it a couple of months later.

The visual programme of the Surrealists, however, proved to be too restricted for Reigl. She tried to break out from the prescribed, exclusively figurative mode of expression. And it is in this attitude where the true essence of Judit Reigl’s life oeuvre dwells. She burst out of the illustrative framework early on, and already in 1952 began experimenting with automatic gestural abstract symbols that resembled writing. Her breakthrough from figurativity simultaneously meant a step beyond Surrealism.

Beyond these formal questions, contrary to the Surrealists, Judit Reigl regards the painting not only as an unconscious imprint of the psyche, but also as a surface that receives corporeal energies set free, which she uses as an implement of the body battling with the material of the unmixed elementary colours (yellow, black, blue, red) of industrial paint.

Breaking out from figurativism and from formal limits results in attaining “emptiness”, from which something new can be born. An equal liberation of psychic and physical energies leads to an ecstatic creative state. Outburst (1955-1958), Centre of Dominance (1958-1959), and the series, Mass Writing (1959-1965) are supported by these two mental motifs. The mental motif takes on formal and sculptural weight in the moment when these series refer to cosmic vistas and laws of physics - force fields, the Big Bang, or to kinetic, centripetal, centrifugal and gravitational energies.

The Experience of Weightlessness (1959-1965) and the corpus entitled Guano (1958-1965) indicate the closure of this first cycle. With the latter, the artist brings out ruined canvases, which protected the floor of her atelier for years from dripping paint, and on whose surfaces the convoluted material and alluvia visualise a kind of depth of time in relation to her dynamically painted earlier series, constituting a “mausoleum” of the memories of all the gestures rendered up till then.

In the painting oeuvre of Judit Reigl, it is in 1966 when the figure returns at first, indicating the overture of a new cycle. In the series entitled Homme (Man, 1966-1972), we are confronted with floating human bodies, body parts and aerodynamic torsos depicted vertically in yellow, red and blue, on monumental white or black grounds.

Freeing herself from this figurative cage for the second time, the artist once again attains the emptiness from which something new can be born: in the series entitled Déroulement (Unfolding, 1973-1985), music as an experience conducive to attaining ecstasy provides the impulse, rhythm and structure. In the painting ensemble entitled The Art of the Fugue, inspired by Bach’s music, Reigl employs a new technical method of painting the canvas on both sides. She applies glycerophtalic paint on one side, which seeps through to the other side, and which she then covers with acrylic paint.

Since glycerophtalic paint repels acrylic, the acrylic peels off the motifs that have been created by the glycerophtalic paint that had seeped through, and it can only cling to the untreated parts of the canvas. In this way, chemically, physically and visually, the ensemble of the leading voice and the accompaniment comes into being. Entrée-Sortie (Entrance-Exit, 1986-1988) represents the closure of this second cycle.

With large, dark monochromatic surfaces, the artist extinguishes every sign referring to movement, dynamics or gesture, and by employing the motif of a doorway, she arouses the sensation of anticipation. It is as if Reigl has painted a door so that the human figure appearing on her canvases again after 1988 could stroll through it.

The exhibition arranged at the Ludwig Museum Budapest attempts to present the varied problematics and various stations of this extraordinary life oeuvre, both thematically and chronologically.

The exhibition is realised with the collaboration of Kálmán Makláry Fine Arts, with the support of the Institut Français and the British Council, Budapest, and in the framework of the Budapest Spring Festival.

The exhibition is curated by Kálmán Makláry and Róna Kopeczky.