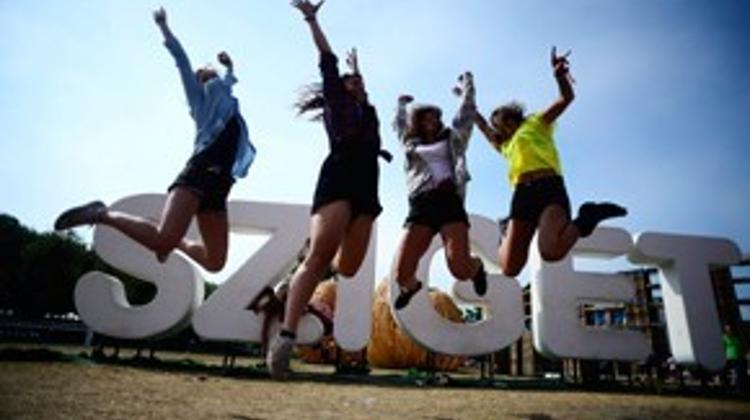 Outkast, Manic Street Preachers and The 1975 were all new acts confirmed to appear in Hungary this summer, Sziget organizers revealed this week at a press event. They join acts announced earlier such as Queens of the Stone Age, The Prodigy, Macklemore, Imagine Dragons, Bastille, Skrillex, Placebo, Lily Allen and The Kooks. The End Show will be presented by Calvin Harris, and now it’s also official that there will be an Opening Show with Deadmau5. Sziget takes place between 11-18 August and once again offers 'the festival-holiday of a lifetime', read on for news of fresh fun activities and event venues.

’Booking a strong international line-up has been quite a challenge in the last few years, since the early August date meant that many bands were overseas and couldn’t accept our invitations. We came to the solution that the 2014 Sziget is a week later, so we’re not clashing with the dates of US and Japanese festivals and it seems to be the right choice.

This year’s line-up is definitely more appealing’ – said Karoly Gerendai, Sziget’s main organizer. ’On the other hand we haven’t given up our aim to make Sziget an extraordinary visual experience as well, we’re also putting lots of efforts into further improving our services, so be prepared for a festival that looks and feels great’ – Gerendai added.

The press conference revealed many changes regarding the venue and program structure. One of the most important ones is the fact that Day 0 will provide a program as strong as the regular days, presenting Anti-Flag, Ska-P and Queens of the Stone Age.

And let’s not forget about the fact that Day 0 will also host the Opening Show by Deadmau5, so besides the End Show by Calvin Harris – by now almost traditionally taking place on the last day of the event – there will also be another spectacular party at the main stage to warm up the crowd for the non-stop week of fun.

Sziget was invented to be a community area, a place to meet and get to know people. Since the first edition the festival tried to live up for this mission, providing activities for bigger and smaller groups at the same time.

A new venue, the Campfire Stage is also designed for the same purpose, providing the chance for amateur and professional musicians to apply and – if chosen – to play some inspiring acoustic songs at the big fire. This stage is also Sziget’s special way to remember Woodstock, the mother of all festivals that took place 45 years ago.

Sziget Community Garden will be another venue that is fresh and new (not just for Sziget but for the whole festival scene) welcoming open-minded visitors and providing a great insight in the world of urban gardens. Sziget Beach was an instant hit in 2013 and the organizing crew is happy to announce that the chill-out beach venue will also return this year. And if we talk about special community areas on the Island of Freedom, we should definitely mention the Ruin Pubs Quarter, introducing some of the most original Budapest bars.

2014 will also see the return of the massive fun activities at the main stage, including the Color Party, the Flag Party, the Balloon Party, the Beach Ball Party and the Bubble Party. And the fun starts already before Sziget, since the organizing crew also decided to start Mission:Szitizen, an international game with the aim to inspire the most dedicated Sziget fans to show the whole world what they got.

Teams of 2-4 persons will compete with each other before the festival, trying to accomplish pre-determined missions – ranging from some easy ones all the way to the craziest of ideas – to prove their talent and motivation. The whole competition will be based on an online platform where the teams will upload their newest accomplishments, while the winners will get some great prizes at the festival.

Besides Woodstock, the other important anniversary linked to Sziget 2014 is the fall of the Berlin Wall, exactly 25 years ago. Cooperation with the Berlin arts scene and also a 100 meters long wall – decorated by street artists and the Szitizens themselves – will all serve the purpose to remember this great act of freedom.

Sziget will also bring some changes for the lovers of e-music. The old Arena truly reached its capacity limits, so the organizing team decided to move some of the bigger names to the Main Stage, while also the huge tent of the A38 Stage will host many electro artists, including the newly confirmed Madeon and R3hab. Besides, there will be an even bigger Colosseum venue designed to take over the role of the ’party center’.

Hungarian bands will once again get an open air venue in the form of the Petőfi Radio VOLT Festival Stage, presenting the best acts of the host nation and also some acoustic gigs after 11pm.

Another of the spectacular changes is the introduction of the World Village, a huge concentrated venue that presents great world music bands and also hosting Roma, Afro-Latin and Hungaricum programs. This is where heritage meets global experience and now, instead of presenting all this value on smaller separated venues, the World Village is ready to compete with the biggest stages of the festival also in terms of popularity!

The World Village stage will have 6 slots per day, presenting the new stars of the world music genre, a magical music journey with bands from Mali, Congo, Argentina, Israel, Canada and so on. Roma bands will also be presented at this venue – keeping the very high standards of the old Roma Stage programs – and what’s also very important: after the concerts there will be DJ sets throughout the evening.

During the daytime the World Village will host afro-workshops, drum courses, Thai massage, capoeira and samba presentations, while the Hungaricum programs will also give a nice and very important taste of Hungarian folk culture, including dance courses, handicraft presentations and so much more.

Getting bigger and more colorful is also the concept behind the new Europe Stage, merging the former Mambo and Holland meets Hungary stages and providing a truly European alternative… surely the right place to find new European talents that are already known back home, but still looking for their international breakthrough.

This year the Europe Stage also serves as an important venue to present the Berlin music scene, but also introducing Italian, Dutch, Spanish and many other bands from the old continent. Make sure you also check out the Youropen Talent Festival, also hosted by the Europe Stage, presenting talent contest winners from over 14 countries on Days 0 and -1.

The lovers of blues and Irish music will also find their favorites on one stage, with thematic days for both genres. And it’s very important to mention that this year’s Blues and Irish Stage also serves as a place to remember the great Andor Olah, an excellent blues musician and also a dedicated organizer of the Hungarian blues scene, who died recently.

Another of the new venues is the Street of Universities. If you like Hungary and could imagine yourself studying here, that’s the place to check out possibilities. And if you’re an open-minded festival visitor, you will surely visit the Sziget Art Zone as well, which is the artistic center of this year’s Island of Freedom.

Visual artforms are more and more important for Sziget and the organizers also announced a tender for artistic installations, including the already known giant sculptures, but also looking for the new liberty statue of the festival. This year’s visitors will see even more artistic lightings on the streets of the event and also introduce flower-installations and a giant sandbox with sand sculptures.

Sziget has a clear mission to help promoting the host city, Budapest. An easily visible way of cooperation between city and festival is the Sziget Eye ferris wheel, which will stand in the heart of Budapest for the whole summer season, all the way till the end of September.

During the festival there will also be another Sziget Eye available right on the Island of Freedom. And Budapest will once again move into Sziget, presenting the best ruin pubs, museums and even the opera on location, while Szitizens are once again helped to discover the Hungarian capital with the Citypass season ticket (including free public transport, spa entrance, etc.)

Discounted tickets for ’Advance round 1’ prices are available till the end of the month. For more information check -out www.szigetfestival.com