Debut Of Giant Otters In The Budapest Zoo 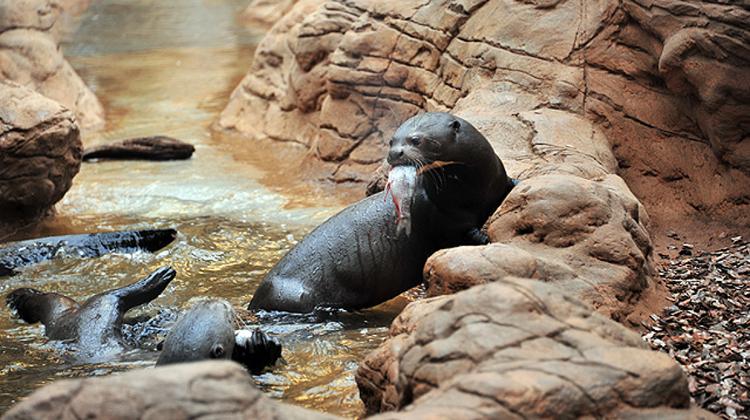 From now on the visitors of Budapest Zoo can observe a new, special species, which was never seen there before. On September 10th rare giant otters have arrived to the Zoo. There are three of them, and they have received their own place behind the Palm house (Pálmaház).

The leaders of the city follow a concept of systematic development, where the prior aim is to preserve the values of the past and to introduce modern professional guidelines through presenting the nature with a scientific approach, said Deputy Mayor Tamás Szentes during the inauguration ceremony.

This year’s number of visitors is expected to exceed one million again, and with that the institution will not only keep its first place among the most popular cultural and touristic sites in Hungary, but it will also be able to further develop, added the Deputy Mayor.

The giant otter (Pteronura brasiliensis) ranges across South-America, its native habitat is especially Brasil, and no wonder why it has got this name. These animals can even weigh 30 kilograms, their total body length from nose to the end of the tail can even exceed two meters.

The Zoo was planning to introduce this interesting and rare species for years, the living place of the animals had been created after a significant reconstruction of existing premises, which were built in 2000.

The total cost of the works reached approximately HUF 36 million, HUF 30 million of which was provided by the Municipality of the City of Budapest.