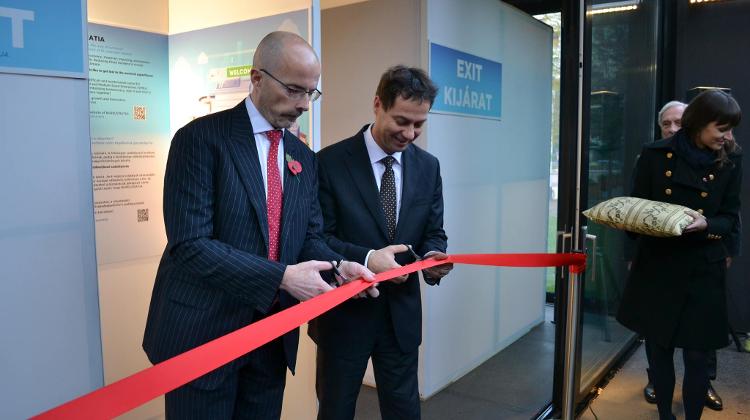 A symbolic imaginary city, called “BurEUcratia”, was erected at Erzsébet square in Budapest and opened today by British Ambassador Jonathan Knott and State Secretary for Economic Regulation, Béla Glattfelder from the Ministry for National Economy. The installation aims to raise awareness of the need to cut EU red tape that hinders business growth and competitiveness in all EU member states, particularly hitting hard on small and medium size enterprises.

Millions of Euros worth of GDP is lost every year and thousands of new firms and jobs never get created in Europe due to problematic or poorly understood EU regulations. Companies often have to waste efforts they could otherwise spend on innovation and investment to struggle with complex regulatory burdens.

We welcome the new Commission’s focus on better regulation and the creation of the Vice President’s role to this effect. We now must ensure that the commitments are enforced so that businesses can focus on the real work of selling more products, growing their businesses and employing more people,” said British Ambassador Jonathan Knott in his speech opening the labyrinth.

In Britain, small and medium-sized enterprises (SMEs) represent 99.9 per cent of the private sector economy, employing an estimated 14.4 million people, 59.3 per cent of private sector employment. According to government data, Hungary’s economic structure is similar, with 99.8 per cent of all private companies belonging to the category of SMEs employing less than 250 staff. Two thirds of Hungary’s bilateral trade is done with other EU member states according to data by the Central Statistics Office.

The symbolic maze depicts the damaging effects of EU over-regulation to SMEs and shows that reform is possible when stakeholders work together. The labyrinth opens on the first anniversary of the Business Taskforce report – “Cut EU red tape” – which was compiled by six British business leaders upon the request of UK Prime Minister David Cameron. The Taskforce’s One year on report about the achievements made over the last twelve months is also published today.

A key finding of the October 2013 Business Taskforce report was that EU red tape causes the most damage to the smallest businesses that have less resource to deal with it, and are therefore affected disproportionally. In his speech opening the maze today, Ambassador Knott noted the progress that has been made in delivering the Business Taskforce recommendations for reform, with a third having already been achieved through the annulment or amendment of certain EU rules, and welcomed progress made on a number of other recommendations.

He added that recently, the European Commission’s High Level Working Group on Administrative Burdens has also published favourable recommendations in order to eliminate EU over-regulation. These recommendations endorsed all of the ‘COMPETE’ principles; principles also proposed by the Business Taskforce to ensure new EU proposals promote innovation and growth. This is just part of the growing support for reform across Europe. There is however lots more work to do.

The Hungarian government was represented at today’s event by Mr Béla Glattfelder, State Secretary for Economic Regulation of the Ministry for National Economy. In his opening address Mr Glattfelder said: “With our economy largely dependent on SMEs and bilateral trade with other EU member states, Hungary supports the endeavours of the UK and the European Commission in cutting EU red tape and facilitating the smooth and successful participation of European SMEs, including the ones in Hungary, in the single market.”

“BurEUcratia” will be open to the public for three days in order to raise awareness of six of the EU rules identified by the Business Taskforce as the most problematic areas of excessive regulation affecting European SMEs. Through simple explanations and visual illustrations, visitors entering the maze can learn in an informal and engaging way about the effects of selected EU rules and how they can confuse businesses or cause them unnecessary problems.

The topics tackled are: prescriptive requirements on data protection, inflexible and unclear rules on working time, costly official controls on food and animals, unnecessary rules on SMEs transporting a small amount of waste, the lack of a fully functioning digital single market in the EU and uncompetitive crop protection rules.