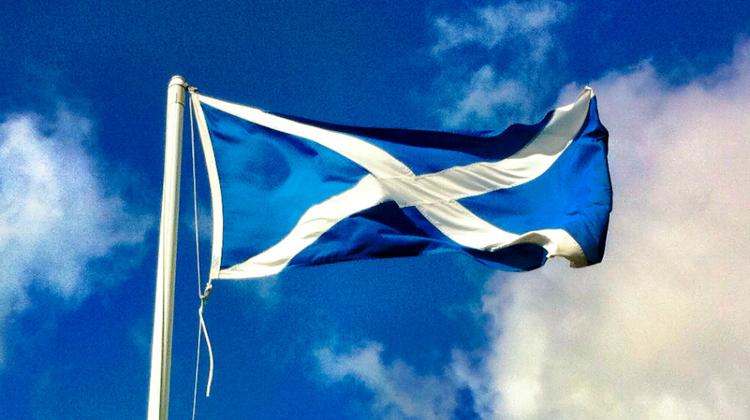 By Jonathan Knott, UK Ambassador To Hungary: "On Sunday, 30 November, we celebrate Scotland’s national day and anyone passing the British Embassy in Budapest will notice a subtle change.

The red, white and blue of the Union Flag has been replaced with a simple blue field with a bold white cross running from its corners. It is the Saltire. The cross of St Andrew, the Patron Saint of Scotland, whose feast night is marked by Scots across the world.

This weekend, we celebrate the best of Scotland, and all that this land and its people have contributed to the world. Its history and heritage: a country rich in culture, creativity and commerce; home to some of the most breath-taking scenery imaginable.

The 12 months since the last St Andrew’s Day have been remarkable. It has been a year when Scotland has welcomed the world, hosted two great international sporting events (the Commonwealth Games in Glasgow and the famous golf tournament, the Ryder Cup at Gleneagles) , and when the Scottish people determined their own future.

2014 has been, unofficially at least, the year of Scotland. And what a year it has been!

2014 was also the year that the United Kingdom demonstrated that values aren’t just something we talk about abroad - we live by them at home.

In a defining moment in British history, and by a decisive majority, the people of Scots voted to remain part of the United Kingdom, one of the most durable and successful political unions ever seen. Who would have thought that politics could be more exciting than sport? In a world where separatism all too often leads to conflict, the Scottish referendum demonstrated Britain’s confidence in her own democratic institutions and processes.

St Andrews Day is an ideal time to think about the impact Scots and Scotland have had on the world. From Haggis to Hogmanay, golf to the Highland Games - to its less well-known exports.

Did you know, for example, that James Bond isn’t English? Scottish author Ian Fleming described him in his books as a Scot. Or that penicillin was discovered by another Fleming, and that television and the steam engine were invented in Scotland too?

Scotland today has a huge amount to offer whether you are a tourist, a student or looking to do business.

This year looks like being a record year for tourism, but in a usual year, 20 million people can be expected to visit Scotland, four times more than the entire Scottish population.

They come for Scotland’s mix of vibrant, cosmopolitan cities; the biggest arts festival in the world; the beautiful, clean and unspoilt scenery, with thousands of historic castles, houses, battlegrounds, ruins and museums.

And 40,000 overseas students come every year to seek an education fit for a King. It was, after all, at one of Scotland’s world-class universities, St. Andrews, that HRH Prince William studied and where he met his future wife.

This academic excellence helps to continue Scotland’s proud tradition of innovation. With the highest level of education in the UK outside of London, Scotland is already a top location for Research & Development and Foreign Direct Investment in the UK.

Visitors can enjoy Scotland’s food and drink, famed around the world, and the great outdoors.

And let’s not forget Scotland’s contribution to global fashion. It’s no accident that tartan and high quality Scottish textiles are beloved of designers the world over.

This St Andrew’s day, take another look at Scotland. Whether it is uncovering forgotten Scottish ancestors, forging a new business relationship or enjoying an unforgettable holiday, you can be sure it will surprise you."