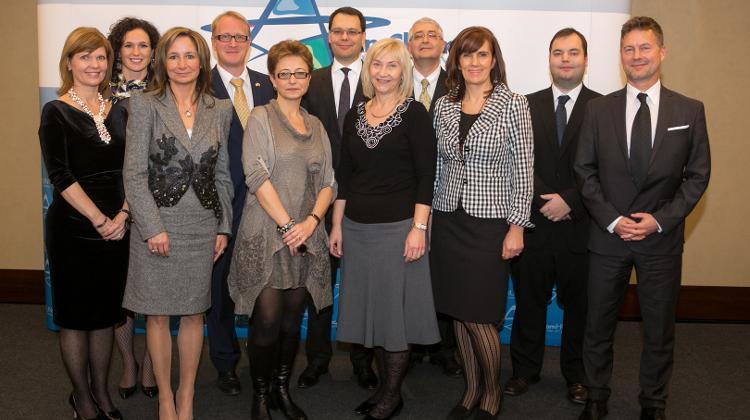 Ferenc Pongrácz, Business Development Executive of IBM Southeast Europe was elected as President of AmCham for two years. Ferenc was elected to Presidency from the Board, where he was SVP between 2013-2014.

Dr. Andrea Jádi Németh, Managing Partner at bpv | Jádi Németh Attorneys at Law was elected as Second Vice President for a two-year term. Andrea served as SVP to AmCham before and she is currently co-chair of the Membership Committee of the Chamber and was the Chair of the Women of Excellence Award Jury between 2010-2012.

Four new members were taken onto the Board:

Andrea Juhos, Managing Partner of Lee Hecht Harrison Hungary was re-elected to the Board for her second term.

We would like to thank outgoing President William Benko and Board members Gábor Gonda, Edina Heal, Márk Hetényi and Eszter Szabó for their dedicated service during their tenure!

AmCham would like to thank Weil, Gotshal and Manges for sponsoring the General Assembly.

The General Assembly also gave a forum for the presentation of the tenth Dr. Iván Völgyes Award which recognizes an individual’s significant contribution to the strengthening of US - Hungarian investor relations. This year the award was presented to Gábor Garai, Honorary Consul General , Honorary Foreign Economic Relations Counsel of Hungary and attorney at Foley & Lardner LLP, Boston.

“Gábor Garai does a lot to help Hungarian firms to extend their business in North America, as a lawyer and in many time also as an investor in Hungarian startups. His enthusiastic commitment to Hungary impressed me and I support wholeheartedly his nomination for the Ivan Völgyes award.” (excerpt from his recommendation letter)