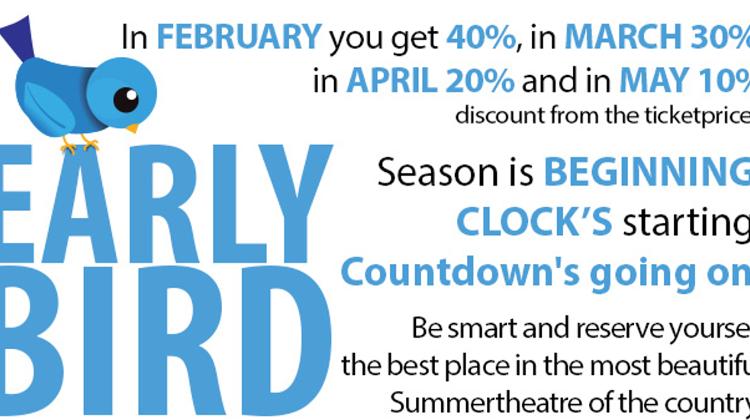 If you want to take advantage of the best prices for the best venues at the country's most beautiful summer theatre performances, you may want to be “an early bird". In February, tickets can be purchased at a 40% discount to the special productions at the Open-Air Theatre on Margaret Island and the first 400 tickets will include tickets to the Theatre Boat as a gift.

The 11th Budapest Summer Festival is preparing for a richer program than ever before for the summer and is the first to introduce the Early Bird Promotion Campaign made popular by the hotel industry and airlines in the cultural sphere. "This is not only a sounds good, raise awareness tool, but in our case, the symbol is associated with the summer.

The bird represents happiness, music, freedom, and the anticipation of summer. Not to mention that at the same time that names of the special productions and guest stars was announced, the first swallows started heading toward Margaret Island," said Teodóra Bán, the Director of Szabad Tér Színház Nonprofit Kft.

The campaign lasts from February to June until the Festival opens and with regard to the best discounts and gifts, offers several money saving opportunities to early birds. In February, five performances have been announced from the Open-Air Theatre at Margaret Island, which this month tickets can be purchased at a 40% discount online or in person.

It’s worth it to pay attention to the Theatre’s communication channels – website, social networking site, and newsletter –, since the performances offered continue to grow, but the discounts are decreasing: in March 30%, April 20%, May 10% discounts to the best sites.

The season opens on Margaret Island with the Liszt and Dante concert on June 12 – the National Philharmonic conducted by Zoltán Kocsis. This year's great opera production will be Károly Goldmark’s monumental Opera Queen of Sheba on July 3 and 5, a joint production with the Hungarian State Opera organized by Csaba Káel. On July 10, Carl Orff’s 120th birthday, the Szeged Contemporary Ballet and the Dohnányi Orchestra will present a special production of the Catulli Carmina and Carmina Burana, ballet with a grand orchestral accompaniment.

The guest star sensation of the Vive la France! Symphonic soundtrack-concert to commemorate the 100 birthday of Edith Piaf, will be announced by the organizers. In keeping with tradition, Puccini's Tosca will be sung by international star vocalists on August 7 and 9 – in the title role French mezzo-soprano Béatrice Uria-Monzon, and Cavaradossi will be sung by the young Chilean tenor, Giancarlo Monsalve.

This year's musical presentation will be Jesus Christ Superstar, the Honvéd Dance Theatre will present the Benyovszky ballet, and a brand new night Circus-Theatre Revue, which evokes the world of the French Moulin Rouge. On August 22, the founder of the Gipsy Kings band, Chico & The Gypsies arrives.

True to the More than theater, an experience! slogan, the summer theatres of Budapest are increasingly popular among its residents and domestic and international visitors alike and this year will offer more than one hundred programs in numerous genres, supplemented by special events and complex services.

Theatrical performances, concerts, exhibitions, free family programs, children’s theatre, Jazzy Tower-concerts, theater review, water tower lookout, theatre boats, scheduled pleasure boats, hotel packages and a number of other novelties await visitors from June to the end of August, at the country's most colorful cultural festival, which is unique and only available in the Budapest Summer Festival venues, which offers a complete experience to visitors. Start planning the year’s nicest experience now; summer in Budapest for your family and friends.