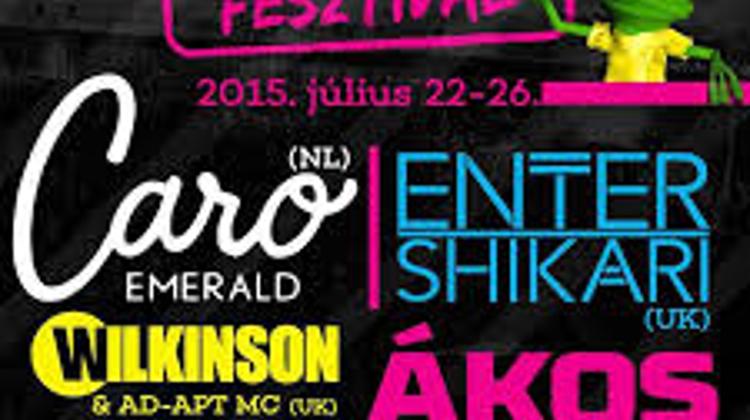 The flagship festival of Hungary’s second city has been organised every year – with another name to begin with – since 2002 and recorded a record 70 000 visitors last year. The festival features several well-known performers from abroad each year, such as Caro Emerald (NL), Enter Shikari (UK) and Wilkinson (UK) this year, alongside the likes of the popular Hungarian rock bands Quimby and Tankcsapda.

As you know, Debrecen is 230 kms from Budapest…

The festival will again kick off and await its guests in the park surrounding Great Forest Stadium and the environs of the recently renovated Water Tower. Last year, seventy thousand visitors chose to find amusement in the "temporary city" erected in the heart of the Great Forest, which offers by far the most modern circumstances for multi-day summer musical entertainment. The extraordinary venue – accessible from the city center even on foot or really in a matter of a few minutes by tram – will accommodate a swirl of colourful programs for an all-round experience.

The gem of the musical program will be the jazz-pop diva from the Netherlands, Caro Emerald, who has already sent her greetings from the cover page of Korzó Magazine, and whose hits (Back It Up, A Night Like This, That Man) captivated the whole of Europe a few years ago; her debut album proved to be one of the most successful Dutch records of all times. Her favourite genre is jazz tunes from the Forties and Fifties that are professionally amalgamated with today's modern pop tones.

A similar big bang is anticipated to come with the performance of the devastatingly energetic Enter Shikari from Britain, who play an alloy of heavy metal and electronic music, and have risen to the ranks of favourites for English and Hungarian youngsters alike. One of the flagships of dubstep, Modestep also arrives from the United Kingdom with their live performance, similarly to the drum’n’bass dj Wilkinson with his world-conquering tune called Afterglow.

Hungarian bands performing over four days seem to be countless, with Tankcsapda presenting their new album on domestic grounds, Ákos returning to the grand stage after two years, as well as a number of highly popular performers from Magdolna Rúzsa, Quimby and Kowalsky meg a Vega to Vad Fruttik on the major stages.

Beyond music, the festival still has plenty of attractions to offer: the most varied gastronomic range ever, romantic nighttime movies in the Great Forest, literary programs as part of the "reading is trendy” program, special play of lights on the building of the Water Tower, side-shows and street theater productions, academic curiosities at University Square, a scientific adventure court organized by the Agóra Science Center, handicraft activities, meetings with non-governmental organizations, sporting facilities and a lot of daytime and evening activities ensure the safe avoidance of boredom even in the extreme case when there is no one familiar around at Campus Festival, also known to be the busiest meeting point of the year.

Ticket for 1 day for Thursday, Friday and Saturday from 15th of July and on the site: 6.990 HUF