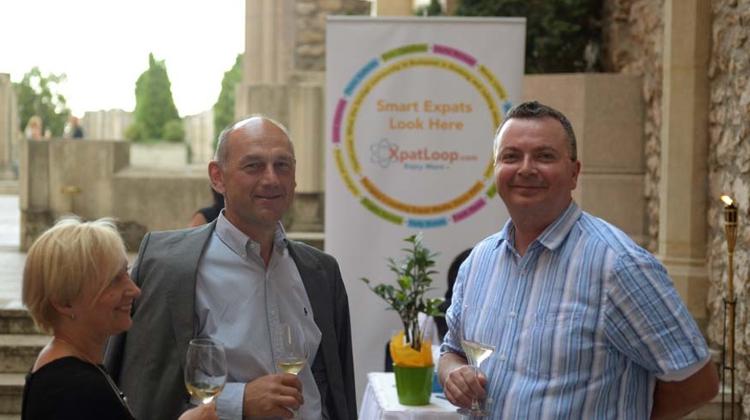 Words by Liz Frommer: The international community in Hungary came together again for a convivial evening of tasting and networking on June 30th.

This Xpat Wine Club event was held at the Hilton Budapest, once more at the kind invitation of the hotel GM, this time in its historic 13th-century Dominican Courtyard - a UNESCO World Heritage location.

Nora Szegedi, one of the key organisers, was clearly delighted to return to such a picturesque setting. ”Such a great spot to meet up outdoors and enjoy the lovely weather, and taste outstanding Hungarian wines,” she said. Stephen Linfitt, the publisher of XpatLoop.com, enthusiastically expressed his gratitude to everyone involved, especially to the great group of wine lovers present.

The two top wineries on hand this time were again truly outstanding: Kreinbacher and Miklós Csaba. Gábor Ladányi and Beáta Fütő were there for Kreinbacher, and for Miklós Csaba . . well, the man himself, Csabi!

Both wineries enjoyed the genuine interest from the wide range of guests for all eight wines on show. Two from the younger crowd, Krisztina and Beatrix Féderer, said they were glad to come again.

”It’s just a great way to enjoy fine Hungarian wines and meet really nice people”, commented Krisztina for the record. Having had a winery in their family’s past, their great grandmother had a vineyard in Tamási, both are keen to keep learning more about the local wine culture, with liked-minded people..

Ultra-modern and ultra-chic, the Kreinbacher winery, founded in 2002 by József Kreinbacher, is built upon the timeless, basalt slopes in the Nagy-Somló wine region- a creation from lava flows over four million years ago.

Miklós Csaba’s estate is a family affair with an array of hand-crafted wines, carefully cultivated with his the help of his father, from just 3.5 hectares in Mór. The soil in Mór is famous for its white-stone, the result of millions of years of decomposition from the Pannonian sea.

Both regions therefore produce wines famous for their mineral complexity as well as longevity. And both regions are best known for whites, which stole the show.

Kreinbacher’s 2012 Furmint was a clear favorite. A coordinator at CEU and knowlegable guest Andrea Schrök was clearly a fan both of the wine and the maker. ”Kreinbacher is the place to be”, she said.

Having also already visited Miklós Csaba, she went on to say that the friendliness and spirit of his estate was incomparable; and the wines incredible of course. Csaba’s 2013 Pinot Blanc, of which only 1300 bottles were produced, was received with much enthusiasm.

It was while working on a Napa Valley winery as a humble tractor driver that Csaba decided winemaking would be his future. Of the five rows of vines he purchased in Mór back in 1997, Csaba did not see much reason in keeping the one row of red in this predominantly white area. However together with his dad they decided to keep it as a test and th ered grapes are now used for a fabulous Siller which was also served to the pleasure of event guests.

The one red of the night was served by Kreinbacher - a surprise enjoyed by all. The focus for this winery is definitely on their sparkling wines, one of which we tasted for our welcome drink- a Brut Classic, 85% Furmint, 15% Chardonnay.

Gabor made no secret of Kreinbacher’s intention: to make Somlói region as famous for sparkling wine as the Champagne region in France. And it’s no joke; with experts from the latter region as advisors, you’re quite likely to be toasting with Somlói at a celebration soon.

The Kreinbacher site has a quote to prove it from Cellar Master at Domaine Paul Bara in Champagne:

"After many years of cooperation and the reveal of our first sparkling wines I feel even more committed to build the future of Somló’s sparkling wines. Along the way – together with the Kreinbacher Estate – we can both follow the traditions of Champagne and exploit the characteristics of this incomparable region.” Impressive!

But Somlói wines are now known for apparently another reason altogether. Hungarian wine-lover, George László, said it was custom for the Habsburgs to always serve a Somlói to a bride and groom on their wedding night to ensure the birth of a son.

But the ”Hungarian wine which has been the daily wine for the ages”? This, said guest László Murányi, would be the Mór Ezerjó.

Csaba Miklós served the 2013 Csakazízéért Ezerjó, a pleasure to all. And the label for this vintage? His mother, a dance teacher and active contributor to the running of his estate. All of Csaba’s labels sport his family in fun and colourful images- a testament to the spirit of his craft.

As the sunset spilled over into the torch-lit courtyardand night began to fall, we were enjoying our lasts sips of the Kreinbacher Somlói red - a fitting ending to a evening rich in community and culture. Dr. Varga Katalin the MD at Settlers Relocation said, "Thanks to the team at XpatLoop for the excellent organisation and magical experience...".

When the evening closed the event manager Nora Szegedi praised both winemakers, "I'm really happy to have them with us tonight; it's unconsciously becoming a part of our concept to invite winemakers with whom we are already dear friends. I think the atmosphere this creates is one of the reasons we have such good feedback about our events, and we’re all very thankful."

Stay tuned to XpatLoop.com for news of the next Xpat Wine Club tasting coming up in July. And be sure to seriously consider joining a special Xpat Wine Trip to the Sauska and Basilicus wineries in Tokaj this September.