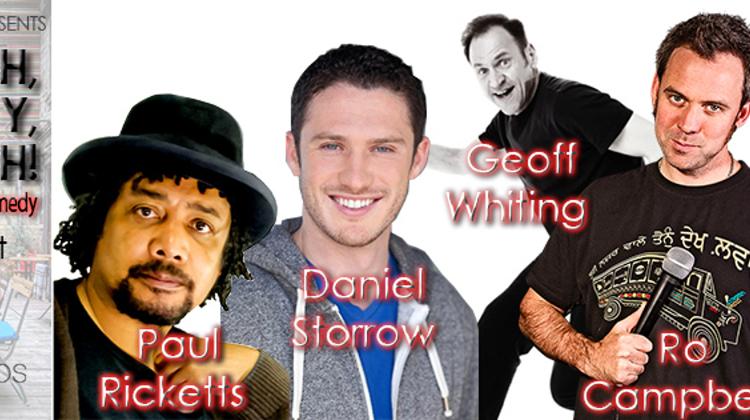 Give your laughing gear a workout with a healthy dose of English humour courtesy of our host Geoff Whiting and cast of international funny men Ro Campbell, Paul Ricketts, Daniel Storrow and Felméri Péter. With over 15 years on the circuit Geoff is a highly experienced comedian with a funny, strong and versatile act that lends itself to any occasion.

UK based Aussie Ro Campbell’s relentlessly entertaining and award winning brand of cheeky slightly dark humour has wowed audiences everywhere from Adelaide to Bangalore, Helsinki to Singapore and many places in between. He has also written for English TV and Radio, played to captive audiences in Maximum Security Prisons and supported Live At The Apollo star Tom Stade on all 47 dates of his UK Theatre tour.

Brought up in Bedford, Paul Ricketts’ career path included jobs as varied as librarian, chimney-sweep, bird-scarcer and musician and primary school teacher before in 2005 turning to stand-up comedy on the advice of his therapist. His intelligent humor focuses not only on sharp observations from life, but also racial, cultural and satirical subjects, intermingled with strange tales of ordinary madness.

Felméri Peter, a Hungarian comedian, started doing comedy from the early age of 1, making his parents laugh. Ten years ago, in 2005, he performed stand-up for the first time, before an audience, at the Transylvanian Comedy Festival Contest. He has won various talent competitions in London, as he is not only hilarious in Hungarian but also in English.

Daniel Storrow started doing stand-up comedy in the early part of the 21st century. He’s performed all over the US and currently lives in LA. When starting out he was a substitute teacher, where he was continually disrespected and undervalued. Daniel enjoys stand-up because even on a bad night, it’s rare that the audience members throw pencils and wadded pieces of paper at him when turned around. A trained actor and San Diego native, Daniel is known for his quick wit and intelligent musings on everyday life.

“Ricketts is a relaxed poise whenever he’s on stage” – Chortle
“Geoff has dry humour and crisp style, he is seriously entertaining” – The Stage
“Campbell shoots straight to the funny bone” – Beat, Adelaide Fringe 2010
“Amazingly funny comic, Storrow had me literally rolling on the floor laughing!” – Michelle Westmiller

Tickets must be purchased in advance:
Contact Jodie by clicking here with all enquiries
2.500 HUF per person for members | 3.500 HUF for guests
Early-bird tickets available for 3.000 HUF for guests until 2 September 2015
Dinner Special for an extra 2.500 HUF between 7pm and 8pm (inc. 2-course fixed meal + glass of house wine)